What’s going on?
On February 14th 2019, researchers from the International Computer Science Institute (ICSI) published an article claiming that thousands of Android apps are breaking Google’s privacy rules. ICSI claims that while Google provides users with advertising privacy controls, these controls aren’t working. ICSI is concerned for users’ privacy and is looking for Google to address the problem.

But what exactly are the apps doing wrong? Since 2013, Google has required that apps record only the user’s “Ad ID” as an individual identifier. This is a unique code associated to each device that advertisers use to profiles users over time. To ensure control remains in the hands of each user, Google allows users to reset their Ad ID any time. This effectively resets everything that advertisers know about a person so that their ads are once again anonymous.

Unfortunately, ICSI found that some apps are recording other identifiers too, many of which the user cannot reset. These extra identifiers are typically hardware related like IMEI, MAC Address, SIM card ID, or device serial number. 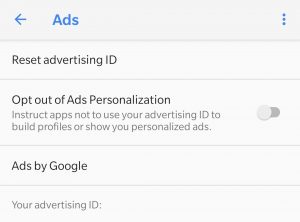 Let’s say you’ve downloaded one of the apps that ICSI has identified as being in violation. This list includes everything from Audible and Angry Birds to Flipboard News and antivirus softwares.

The app sends data about your interests to its advertisers. Included is your resettable advertising ID and your device’s IMEI, a non-resettable code that should not be there. Over time, the ad company begins to build an advertising profile about you, and the ads you see become increasingly personalized.

Eventually, you decide to reset your Ad ID to anonymize yourself. The next time you use the app, it will again send data to its advertisers about your interests, plus your new advertising ID and the same old IMEI.

To a compliant advertiser, you would appear to be a new person—this is how the Ad ID system is supposed to work. For the noncompliant app, however, advertisers simply match your IMEI to the old record they had about you and associate your two Ad IDs together.

Just like that, all your ads go back to being fully personalized, with all the same data that existed before you reset your Ad ID.

But they’re just ads. Can this really harm me?

I’m sure you have experienced the annoyance of being followed by ads after visiting a product’s page once and maybe even by accident. Or maybe you’ve tried to purchase something secretly for a loved one and had your surprise ruined by some side banner ad. The tangible harm to a given consumer might not be life-altering, but it does exist.

Regardless, the larger controversy here is not the direct harm to a consumer but rather the blatant lack of care or conscience exhibited by the advertisers. This is an example of the ever-present trend of companies being overly aggressive in the name of profit, and not respecting the mental and physical autonomy that should be fundamentally human.

This problem is only increasing as personal data is becoming numerous and easily accessible. If we’re having this amount of difficulty anonymizing ads, what kind of trouble will we face when it comes to bigger issues or more sensitive information?

What is going to happen about it?

At this point, you might be thinking that your phone’s app list is due for some attention. Take a look through your apps and delete those you don’t need or use—it’s good practice to clear the clutter regardless of whether an app is leaking data. If you have questions about specific apps, search ICSI’s Android app analytics database, which has privacy reports for over 75,000 Android apps.

In the bigger picture, it’s not immediately clear that Google, app developers, or advertisers have violated any privacy law or warrant government investigation. More likely, it seems that Google is in the public hot seat to provide a fix for the Ad ID system and to crack down on app developers.

Sadly, ICSI reported their finding to Google over five months ago, but have yet to hear back. Their study has spurred many media articles over the past few days, which means Google should feel increasing pressure and negative publicity over this in the coming weeks.

Interestingly, this case is very similar to a 2017 data scandal about Uber’s iOS app, which used hardware based IDs to tag iPhones even after the Uber app had been deleted. This was in direct violation of Apple’s privacy guidelines, caused large amounts of public outrage, and resulted in threats from Apple CEO Tim Cook to delete Uber from the iOS App Store. Uber quickly updated their app.

It will be interesting to see how public reaction and Google’s response measure up to the loud public outcry and swift action taken by Apple in the case of Uber.

Hi there, everyone! This is a “test” post to ensure that the process is working as intended and that everyone should have access to create posts of your own!