Why the Biggest Technology Companies are Getting into Finance
By Shubham Gupta | February 16, 2020

With the rise in popularity of “fintech” companies such as Paypal, Robinhood, Square, Plaid, Affirm, and Stripe, the general public is becoming more and more used to conducting monetary transactions through their phones rather than with their wallets. And of course, the biggest tech companies are trying to claim a piece of the pie as well. Apple and Amazon both offer a credit card, Google is planning to offer checking accounts to users who use Google Pay, and Facebook is going as far as creating a new currency called Libra. 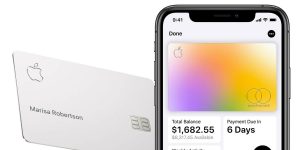 Of course, by expanding these new financial products, big tech companies are expanding their revenue streams and are aiming to immerse users more and more into their ecosystem. However, one of the biggest yet most hidden advantages of offering these financial products is that it opens up the doors for big tech companies to collect financial data. For example, processing a payment transaction through services such as Apple Pay or Google pay allow the company to keep a note of what the consumer bought, when they bought it, from where they bought it, and how much money they spent. This information could possibly be used to better understand consumer spending behavior and offer more targeted advertising to consumers.

Another danger of these services is security. Tech companies having access to your sensitive financial information could possibly lead to your information being exposed in the event of a data breach or hack. In the past, both Google and Facebook have suffered through numerous data breaches which exposed millions of consumer’s social media and email accounts. Additionally, because big tech companies are not held to the same level of regulations as banks and other financial institutions, they are more susceptible to operate in ways with your finances compared to banks. These worries are reflected in recent surveys of consumers asked if they trust big tech corporations with their finances. As seen in the chart below, consumer trust of tech companies handling their finances ranges around 50 – 60%. Facebook, probably due to its history of privacy violations, ranks the lowest with around a 35% approval rating. 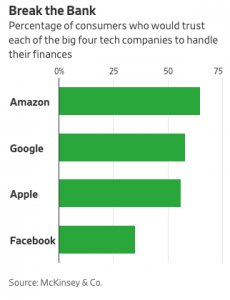 That’s not to say that big tech’s contribution in the finance space has not come without its merits. Apple’s latest credit card, along with being a sleek piece of titanium, offers users helpful charts and visualizations to help them keep track of their spending and eliminates hidden fees. Facebook’s Libra, despite having a lot of partners back out of the deal, is envisioned to use block chain to process payments, making them cheaper, faster, and more secure. Amazon also offers a solid cash back on any purchase made on Amazon.com, Whole Foods, and other various restaurants, gas stations, and drug stores.

With a lot of these tech giants, having such a wide variety of products and services, finance is only the latest frontier for big tech companies. With the surge in popularity of these products especially in the younger generation, more and more companies are taking notice and trying to innovate in this space as well. However, as companies continue to innovate new financial products and solutions, government regulation is quick to follow.