Is Immigration and Customs Enforcement above the law?

ICE’s surveillance on the American population has gone under the radar and kept a secret.

ICE was founded in 2003 and since then it has gathered more and more information on the population living in the United States on the basis of driving deportations. This gathering of information has led to mass surveillance on the population. ICE has accessed data sets containing information on the vast majority of the population in the US. These records come from DMVs in the states that have allowed undocumented immigrants to have a drivers license in the state. ICE has also accessed records from agencies that provide the essential services like electricity, gas and water. ICE has been able to access and purchase these data sets seemingly without any other government or public oversight. Another key access to data is the information gathered from unaccompanied minors trying to get to the US, the information provided by the children is then used to drive deportations of that child’s family. 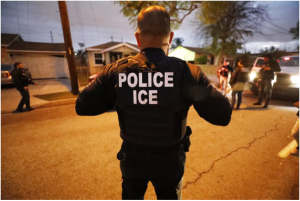 This is not only a legal matter but also an ethical issue. There are privacy laws in place that should protect not only citizens but everyone living in the US and ICE seems to be above those laws and gathering information on the entire population. There does not seem to be any enforcement of the laws to hold ICE or agencies providing the data to ICE accountable on the data they have accessed. How can these laws be enforced when ICE is able to do all their surveillance in secret? States and especially government agencies should have to have the data they have stored strictly regulated. These are government agencies that the population is trusting to keep their data safe and this data is being shared without consent or notification.

ICE has access to drivers license data on roughly 75% of the US population. This means that the surveillance that ICE has is not only limited to undocumented immigrants but also extends to American citizens. ICE is also able to locate 75% of adults in the US based only on utility records. ICE has been using facial recognition technology as early as 2008 when they accessed the Rhode Island DMV database to do facial recognition on their database.

ICE takes advantage of the basic necessities that a person living in the US needs to access data on the US population with deportation as the leading reason for the data. The state governments that have allowed undocumented immigrants to have access to a drivers license in their state should also have a responsibility to protect the information of the individuals that have trusted their information to them. Having access to the basic necessities like utilities should not come with the cost of having your data shared with government agencies without your knowledge or consent.