While augmented and virtual reality continue to receive increasing media coverage and popularity in both tech and gaming circles, new strides in parallel reality technology deserve to garner similar focus, if not more. Parallel Reality Displays, a technology developed by Redmond, Washington-based startup Misapplied Sciences, are enabled by a new pixel that can simultaneously project up to millions of light rays of different colors and brightness. Each ray can then be software-directed to a specific person. A mind-bending innovation that allows a hundred or more viewers to simultaneously share a digital display, sign, or light and each see something different. Misapplied Sciences has partnered with Delta Airlines to test the technology in a beta experience at Detroit Metropolitan Airport later in 2020. The idea is that different travelers could see their personalized flight information all on the same screen at the same time. 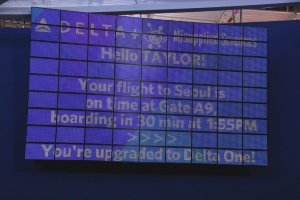 The airport scenario is just one of many applications of the technology. Parallel reality offers personalized experiences for people looking at the same screen. As such, its privacy implications are rich and distinct from those presented by more traditional virtual environments, such as those presented by online news forums and social network platforms. These aforementioned arenas are threatened by issues such as fake news, targeted and native advertising, and online surveillance. Parallel reality suffers from these same threats, and more. Since parallel reality customizes people’s experiences in the physical world, the technology relies on physical surveillance, and as such, poses Orwellian threats accordingly. Moreover, different information can be spread to different people in alarming ways. This can have the potential to further solidify the disparities between people with different politics, values, interests, and beliefs. For example, the isolation of “bubbles” between Democrats and Republicans can be exacerbated and evolve into something worthy of a Black Mirror.

Aware of these privacy concerns, Misapplied Sciences has advocated for opt-in advertising, as well as anonymized tracking of an individual’s physical location. The upside of this technology’s potential does not have to be consumed by its potential dangers. Misapplied Sciences may have designed their technology with a privacy-first mindset, but will other companies exercise similar due diligence? In an age marked by growing levels of digital distrust, advocacy groups and lawmakers alike should begin brainstorming appropriate regulations to mitigate the risks associated with parallel reality.