The Battle Between Corporations and Data Privacy
By Anonymous | September 17, 2021

With each user’s growing digital footprint should come an increase in liability and responsibility for companies. Unfortunately, this isn’t always the case. It’s not surprising that data rights aren’t at the top of the to-do list given that more data usually comes hand in hand with steeply increasing targeted ad revenue, conversion rates and customer insights revenue. Naturally, the question arises: where and how do we draw the line between justifiable company data usage and a data privacy breach?

Preliminary Legal Measures
Measures like General Data Protection Regulation (GDPR) and the California Consumer Privacy Act (CCPA) have set a great precedent for trying to systematically answer this question, but they’re far from widely accepted. The former was enacted in the EU and it allows residents to have control over their data. Companies now have to release information about what information is collected/stored, and customers need to provide consent for data to be collected or to be used to marketing purposes. However, companies have found a loophole by just created 2 streams of data collection (one for the EU and one for countries outside of it) instead of changing data policies world-wide. The latter only impacts the state of California, and not many other states have followed suit. Seeing as state by state policies can greatly complicate compliance and data storage measures, companies have actually stepped up to influence and speed up these measures.

Big-Tech’s Influence on Legislation
Surprisingly, Big-Tech (Facebook, Amazon, Microsoft, Google, Apple, etc.) is actually on the front lines of pushing states to pass privacy laws; although it’s not so much a heroic act of benevolence as it is a crafty way to control the stringency of privacy measures put into place. In fact, Virginia’s recently passed Privacy Law was reportedly co-authored by Amazon and Microsoft, and it’s now in consideration in 14 other states using the same exact or even a weaker legal framework. These bills are strongly backed by all of Big-Tech and are quickly moving through the process due to pressure from countless company lobbyists. The biggest impact of these bills is that consumers cannot sue companies for violations of the law. Another key point is that the default setting for users is to opt into tracking unless the user combs through the settings to opt out of it. The industry is counting on the idea that if the country is flooded with these weaker state laws, they will essentially be able to disregard the harsher state laws like the CCPA. In figure below, you can see just how much companies are spending on legislation within one state:

Image: The amount of money spent on lobbying in Connecticut by Big-Tech

Good News on the Horizon
However, it’s important to note that this doesn’t mean that data privacy is a lost cause and that legislation is not effective. Indeed, there are some corporations taking privacy into their own hands and creating large scale impacts. The most scalable of which, is Apple, which released a new data privacy measure that now requires every user to knowingly opt in or out of data tracking for every single app they use. While this was met with heavy backlash from ad-revenue and user data dependent companies such as Facebook, Apple has remained firm in its decision to mandate user opt-in permission for data tracking. Their decision has resulted in less than 33% of iOS users opting in to the tracking which is a massive hit to the ad-tech industry. 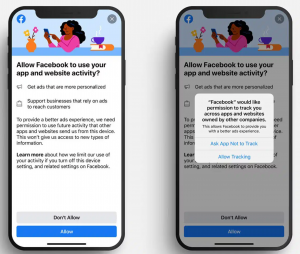 Furthermore, as iOS users have been opting out of tracking, advertisers can’t bid on them so the lack of iOS users has driven up advertisement demand for Android users. As a result, Android ad prices are now about 30% higher than ad prices for iOS users, and companies are choosing to move their ads to Android powered devices. For some context, digital-ad agency Tinuiti’s Facebook clients went from year-over-year spend of 46% for Android users in May to 64% in June. The clients’ iOS spending saw a corresponding slowdown, from 42% in May to 25% in June. Despite these drawbacks, this move alone is forcing companies everywhere to change their data tracking policies because while they’re escaping state and federal privacy measures, they’re getting blocked by wide-reaching, software platform-based privacy laws.