A Chinese Indonesian American’s Call for Data Disaggregation of Asian American and Pacific Islands
By Joshua Lin | May 28, 2021 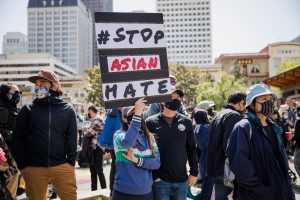 In light of Asian Pacific American Heritage month and the passage of the COVID-19 Hate Crimes Act, I felt both proud but also weary. What better time to pass a bill signaling the government’s efforts to stand by the Asian American Pacific Islander (AAPI) community than a month celebrating the AAPI community? And yet even though the legislation was a step in the direction of progress and reconciliation, I still didn’t feel wholly satisfied, and truthfully speaking, I had my doubts. Having grown up as a Chinese Indonesian American myself, I knew deep down through my lived experience of microaggressions and blatant acts of racism that a single act passed in a month of AAPI celebration was only the beginning of a process of addressing the structurally embedded racism towards the AAPI community.

Before I continue, I want to note that I will use the terms “Asian American and Pacific Islander,” Asian Pacific Islander American, and Asian Pacific American interchangeably. Furthermore, I do want to acknowledge that my experience cannot speak for all the lived experiences of my fellow Asian Pacific Americans. I also want to address the privilege I have in being able to share my thoughts here, as given the current political climate, some members of the communities have experienced acts of severe violence or have even lost their lives in recent events due to racism against the AAPI community. 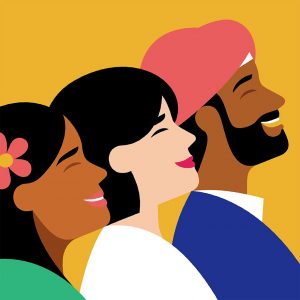 The history of Asian Americans like other racial and ethnic minorities in the US is speckled by racism. There are countless examples of events, institutions, laws, etc. that reflect this turbulent history, but to ask how racism towards the AAPI community has become so embedded into the institutions and structures holding up our country to this day is a more worthwhile exercise. One of the most impactful means of institutionalizing AAPI racism has arguably been classification systems.

Throughout the history of the US census, the AAPI community have seen themselves continuously made visible and then invisible. As Kertzer and Arel (2002) recount, there was constant reshuffling of racial and ethnic categories for the AAPI community. For instance, Koreans appeared and disappeared from the census in the first half of the 20th century. While the current census now attempts to list as many categories as possible and gives the respondent the option to declare their ethnicity if not listed, research that comes out of the Census as well as similar population/community surveys tend to neglect the diversity of the AAPI community in favor of efficiency and comparability.

Current research often includes the aggregation of the AAPI community with each other or with other groups. Government economic reports might list Asian/Asian Americans separate from Pacific Islanders, but the very act of solely reporting metrics for the Asian American community as a whole obscures the large heterogeneity across each ethnic group. In fact, Li Zhou from Vox states that Asian Americans have the largest income gap within a single racial group. Meanwhile, taking the USDA food security annual report, the AAPI community has no representation. They are placed in the “Other” category along with American Indian/Alaskan Native, which certainly has harmful implications to all communities.

Growing up in an Indonesian community, I was surrounded by families barely making ends meet, and yet these economic reports claimed Asians fared even better than the rest of Americans. Their invisibility indirectly reduced their knowledge of food benefit programs, because the government and non-profits were not trying to reach these supposedly successful Asians. From this example, we can see that while this categorization facilitates the comparison across racial groups, the decision to aggregate these groups by researchers effectively removes these groups from the radar and reinforces their marginalization from American society. 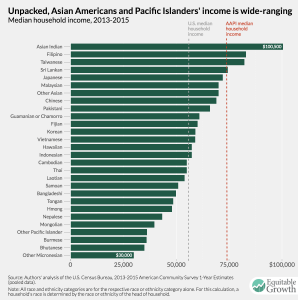 In this way, official government methods of classification have shaped reality to these categories, creating seemingly homogenous racial and ethnic groupings that never existed until the rise of the modern nation-state and the decennial census. As these large-scale classification efforts shape reality, we can see how institutions continue to cement these categories. Ellen Wu writes how the government created the model minority myth to downplay the Civil Rights Movement in the 1960s, citing the successful assimilation of the AAPI community into American society and erasing the history of the Chinese Exclusion Act, the Gentleman’s Agreement with Japan, and Japanese internment (and in all these events, the census also had a role of controlling the AAPI population to oppress them).

But who even had assimilated? All 50+ ethnic groups of the AAPI community? With the creation of the model minority came the creation of the Asian stereotype. The Asian stereotype came in the appearance of a fair skin, small-eyed, black haired individual with a small frame, a meek demeanor, and high intelligence. This imagery had roots in racist media productions that fetishized and sexualized AAPI women and colonial era propaganda portraying AAPI men as emasculated (or even wicked) to facilitate imperialist agendas. Of course, arguably a majority of the AAPI community does not fit this stereotype, but all members of the AAPI community have been expected to fit into this stereotype. As a result, data aggregation through these classification systems serves as a modern method of controlling the AAPI community, continuing the history of racism experienced by us.

And so here I am as a Chinese Indonesian American calling for the continued effort to make all of us Asian Pacific Islander Americans seen as unique. While that push has begun in different parts of society, we are still far from complete visibility.