Venmo is Conditioning Your Expectation of Privacy by James Beck

Add to your ever-growing list of apps and services to pay attention to: Venmo.

Venmo is an interesting service. It’s core ability is to quickly and conveniently facilitate transactions between you and your contacts list. Need to pay your friends back for a night at the bar that got a little out of control? Split a check at a restaurant, but don’t want to deal with the awkward pain of asking the server to deal with awkward fractions to get the amounts correct? Or maybe you have more illicit purposes and you’d rather just not deal with cash.

Regardless of your usage, Venmo is a wildly convenient means of moving money around. Users are fairly easy to find and setting up your account with your bank account information or a credit card is fairly straightforward as well.

So what’s the catch?

Well, there doesn’t seem to be one – for now.

For a long time there has been somewhat of an urban myth of sorts that Venmo is making money by micro-investing the cash that sits in their service while you wait for it to be transferred to your bank account (Users must specifically request that Venmo transfer their balance to their account so significant sums of money can be stuck in Venmo-limbo for long durations). However, for a long time Venmo wasn’t generating a lot of income for itself beyond the usual and expected credit card transaction fee.

The catch is that Venmo is following a model that has been paved out for it by many services before it. Attract a ludicrous volume of users, generate information, and figure out later how exactly to capitalize on those users and their information.

Venmo has now begun to partner with businesses to allow users to pay for real goods and services directly through the application rather than just serving as a means to pay your friends back for that late night burrito at that cash only place that you always forget is cash only. Venmo plans to charge a transaction fee to these businesses in exchange for the convenience of their service – the thought being that users have become so accustomed to the convenience of Venmo between their peers that they will begin to expect that same payment convenience from businesses. This also feels fairly reasonable.

However, Venmo has another facet to it’s service that is worth stopping to consider.

In a way that feels oddly tacked on Venmo also serves as a social media site of sorts. Transactions by default show up in a “news feed” style interface along with all of your contacts’ transactions. The amounts are hidden, but the participants and the user-entered descriptions of these transactions are visible. What you’re left with is a running history of who is paying who and for what. 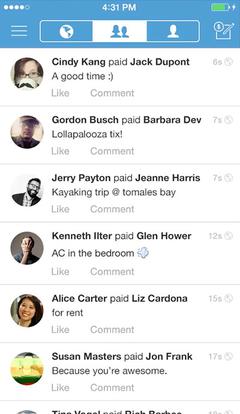 It’s a strange and mostly benign feature. Transactions can be set to private if so chosen and even if you don’t choose to keep things private you still have the autonomy to choose the description of your transaction and keep it fairly innocuous.

What we should be concerned with though is how the addition of this social media dimension to a service that is just supposed to serve as a tool for monetary transactions is conditioning users for the future of Venmo. By incorporating a social media feed as the default behavior of the application, Venmo is slowly normalizing sharing our transactions publicly. This is not something that has traditionally been seen as “normal”.

Our credit card purchases have historically been seen as very private. However, now that we’ve normalized sharing payments between individuals will there be any protest when we start sharing our transactions with businesses by default? Will there be protest when Venmo starts using our past transactions to serve ads to us and our contacts? Or will we shrug our shoulders because the new de-facto business model is to attract users to a free or wildly inexpensive tool of convenience and then eventually introduce targeted advertisements based on our behavior with that service?

I fear it’s the latter and you should too – we’ve normalized sharing so many details of our lives and in doing so have gradually eroded our expectations of privacy. The way you move your money around is about to become the next pool of big data to analyze and the only fanfare to mark the occasion will be an update to a privacy policy that we’ll all forget we agreed to.