The thoughtless act I have been watching is chest of drawers that is regularly used as a trash can. Because the drawers have been placed on a sidewalk, they appear to be trash, but they have not moved for at least a few days (if not longer). One drawer was placed on top and is shaped correctly to hold things, and has been used to hold trash. On the surface, this appears to have a very simple solution: put a trash can there. However, walking by the drawers for a few days in a row, I have seen the trash change. Someone has taken the time to empty the trash on top. It is still unclear why the entire set has not been taken to a dump. 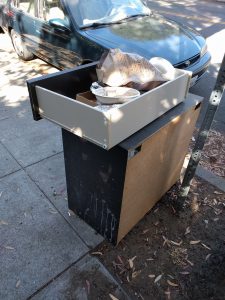