My computing experience that came closest to fully utilizing my hands was working in OmniGraffle while using both a mouse and a MacBook Pro trackpad. OmniGraffle, a diagramming software application, was probably never intended to be used with both a mouse and a trackpad. However, both panning and zooming require holding extra keys while moving the mouse. Instead, I end up using one hand to pan with the trackpad while the other hand zooms and manipulates objects with the mouse.

This works well for moving around a canvas, but fails to add feedback when working on an item. The newest MacBook Pros have haptic feedback used to give a clicking sensation, but this could be used to give other feedback. A similar feature would be needed in the mouse, and is now available from some gaming mice. Using these controls, it would be possible to give force feedback when items in a design are properly aligned, complementing the existing visual cues. Tactile feedback has been available for mobile devices for a long time, but tactile feedback in mice has never become a feature with enough hardware or software support.

Sketch, a similar software which has made extensions easy to build, could probably have an extension written to add this force feedback. Now I just need an expensive mouse and time to program the extension.

I used an Arduino with a red light. I changed the code to have a variable rate of blinking moving back and forth between a delay of 100 to 500 milliseconds. I tested it and saw the change. 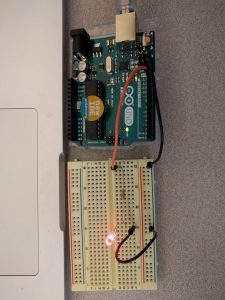 As a kid, my favorite UI was my Game Boy Advance. It was my companion on long car rides for many years of family vacations. The handheld size was the only size that allowed me to play in the back seat of a car, and the long battery life made it possible to play for hours (Dourish 19). Unlike a tangible UI that would connect me to the world, it acted as an escape from reality (Dourish 37). I would become so engrossed in games that I would not get motion sickness on windy roads. The technical features made it possible to use in a situation where no other UI would work.

The look and feel also contributed to my love of my Game Boy. The back was shaped to make it clear where to place my hands so my fingers could use all 8 buttons (Dourish 52). The comfort let me forget about any physical limitations. Even the exterior plastic color was important. The color (named “Glacier”) was a translucent blue that made all the internal components visible. As a kid who had received an electronics kit for Christmas the previous year, I was excited to see push-button switches that I recognized from my kit. I had a sense that someday I could understand every component I saw underneath the skin of my Game Boy (Kaptelinin 22). With my Game Boy, I could both escape the world and hope for a future where I could control every detail of my games.