1.) The safety rating was ambiguous to the users, causing problem of understanding (ex. some users think the more ‘helmet’ a route has, the more              dangerous a route is; while some feel the opposite) Safety helmet icon is confusing

Suggested design solution: find a bike helmet icon or something else like a star, could be yellow, Use traffic light metaphor instead of discrete             icons (red = stop/danger, yellow/be careful, green/all is good go!

3.) Map visualizations are not self explanatory. The green dotted line has been interpreted as bike boulevards, alternative routes etc.

4.) People like the idea of tapping the phone during bike ride to record something along the way.

5.) … but female respondents didn’t keep their phone in their pants pocket because they are non existent or too small. They keep it in a backpack instead.

6.) Recent / saved route confusion: How are the routes saved and named?

7.) Are the routes suggested on the landing page saved or recent routes?

Suggested design solution: After completing a new route the app automagically saves the route to recents for display when need or in relevant          context (ie. user looking for route from same starting point)

8.) The report dots are ambiguous (but clearly tappable)

Suggested design solutions: use exclamation marks, the report dot icon should be changed after specified to a certain type of report

9.) Route abstraction confuses some users, some prefer the route review on the map

Suggested design solution: Make route review on map, maybe an option to toggle between the two 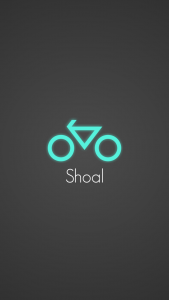 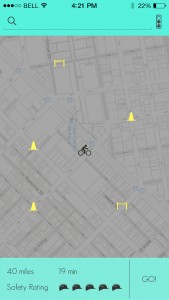 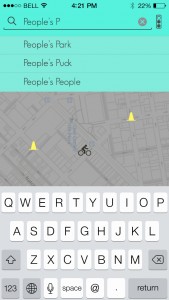 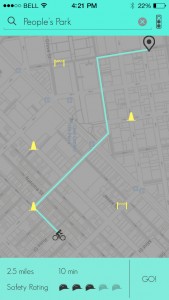 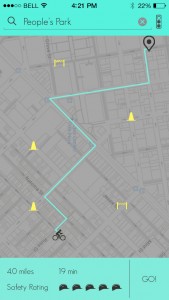 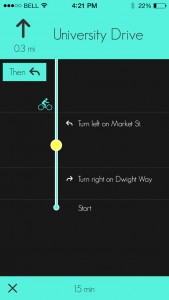 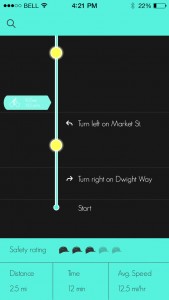 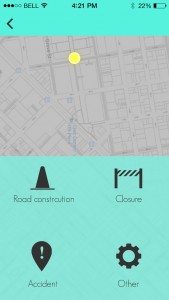 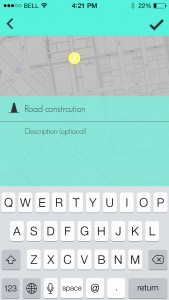 We discovered a way to customize the Google Maps view. We’ve found a tool for creating a scheme from scratch and a collection of presets. For now we’ve decided to go with the preset called Light Monochrome. Choosing a simple map view will allow our data to stand out. 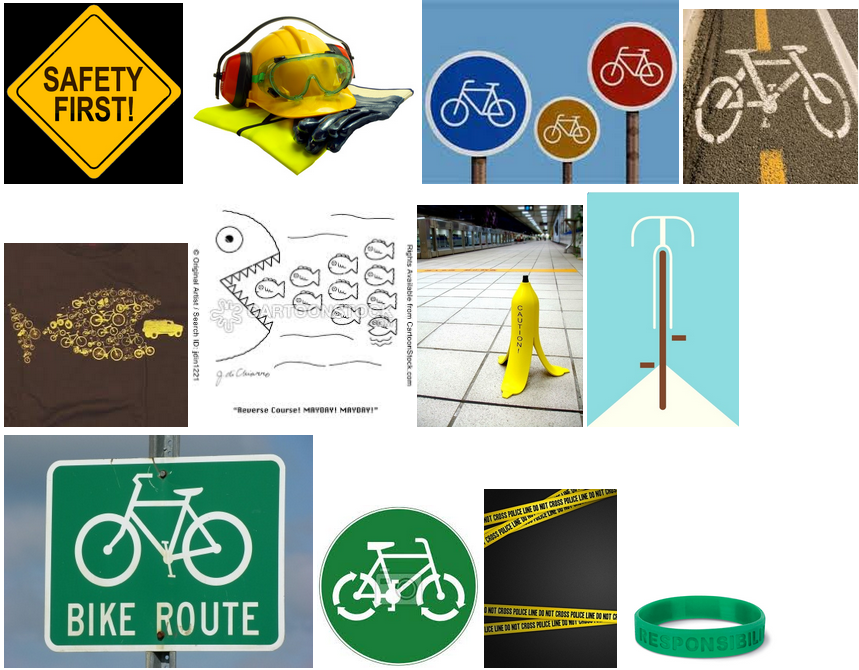 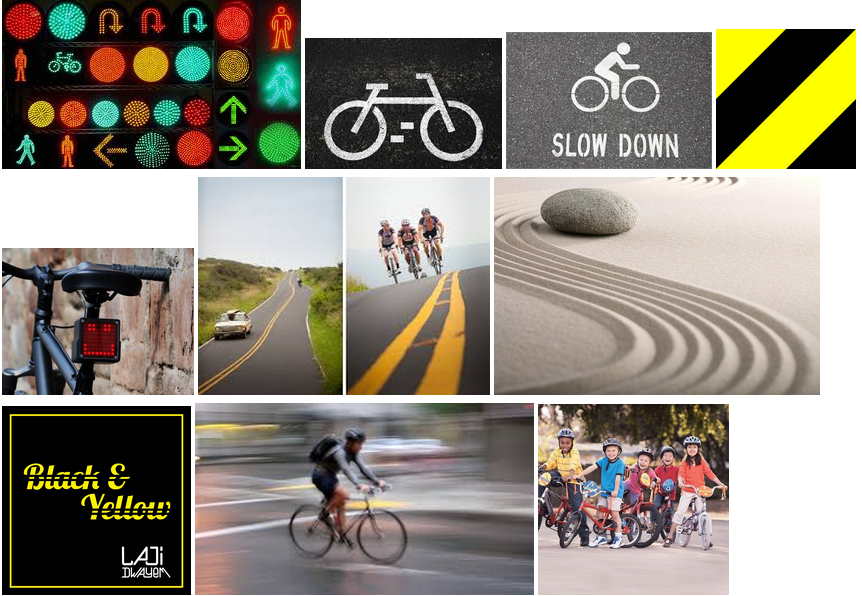 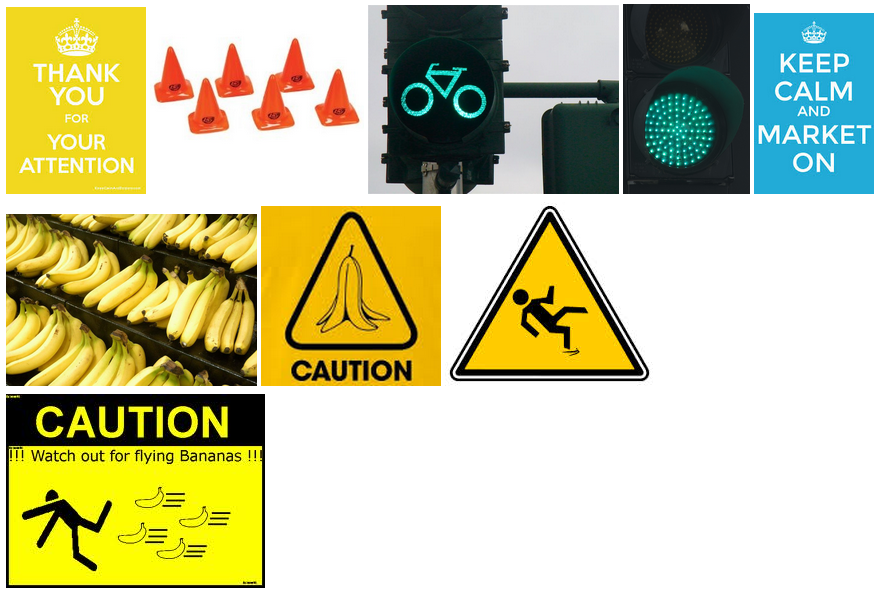 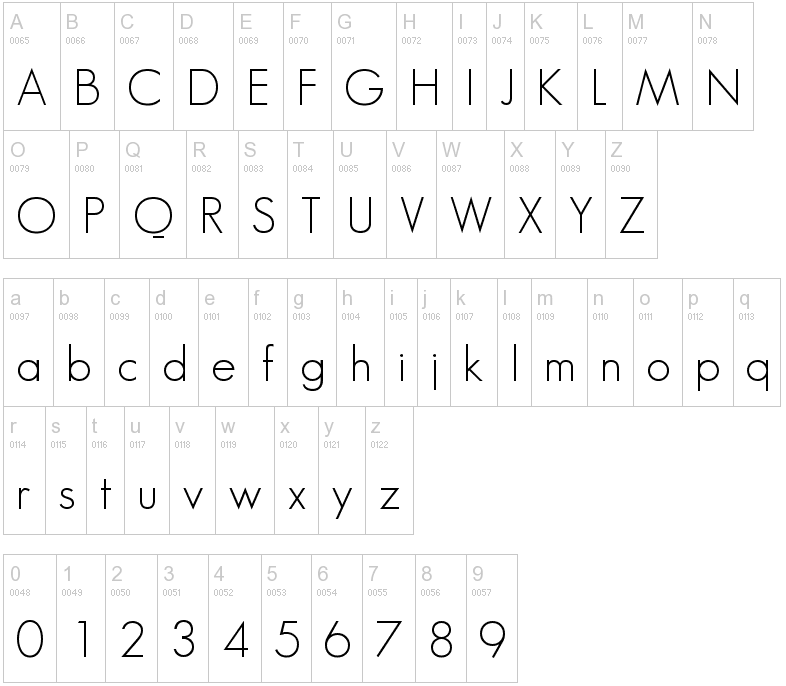 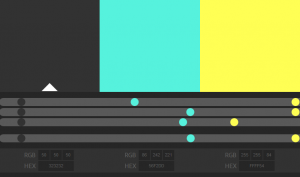 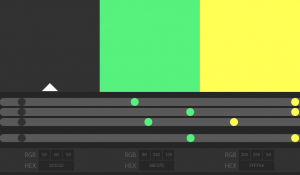 Search for a route 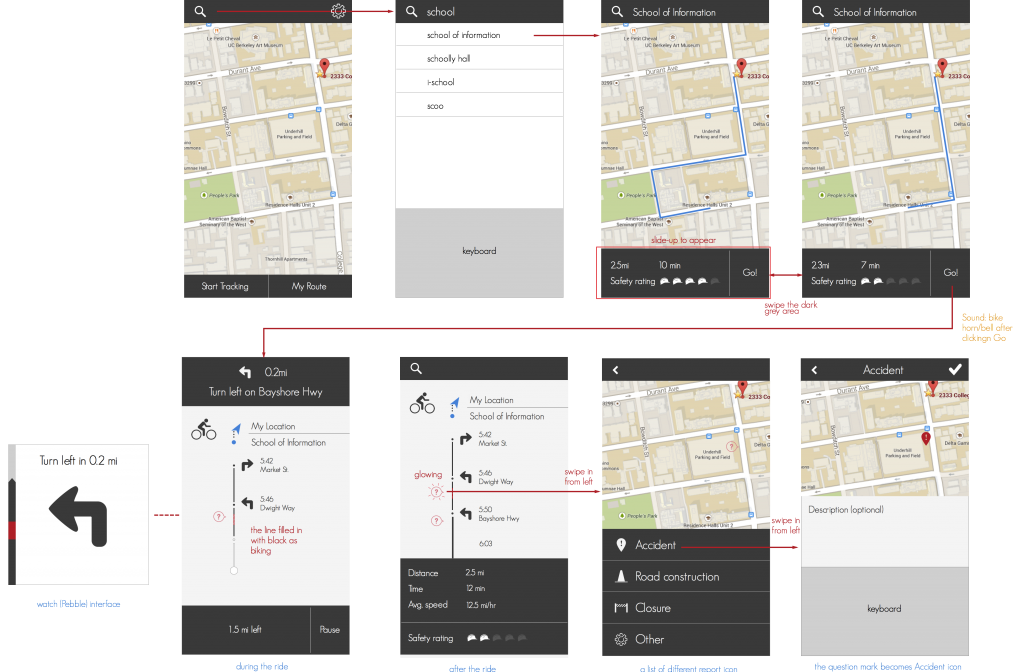 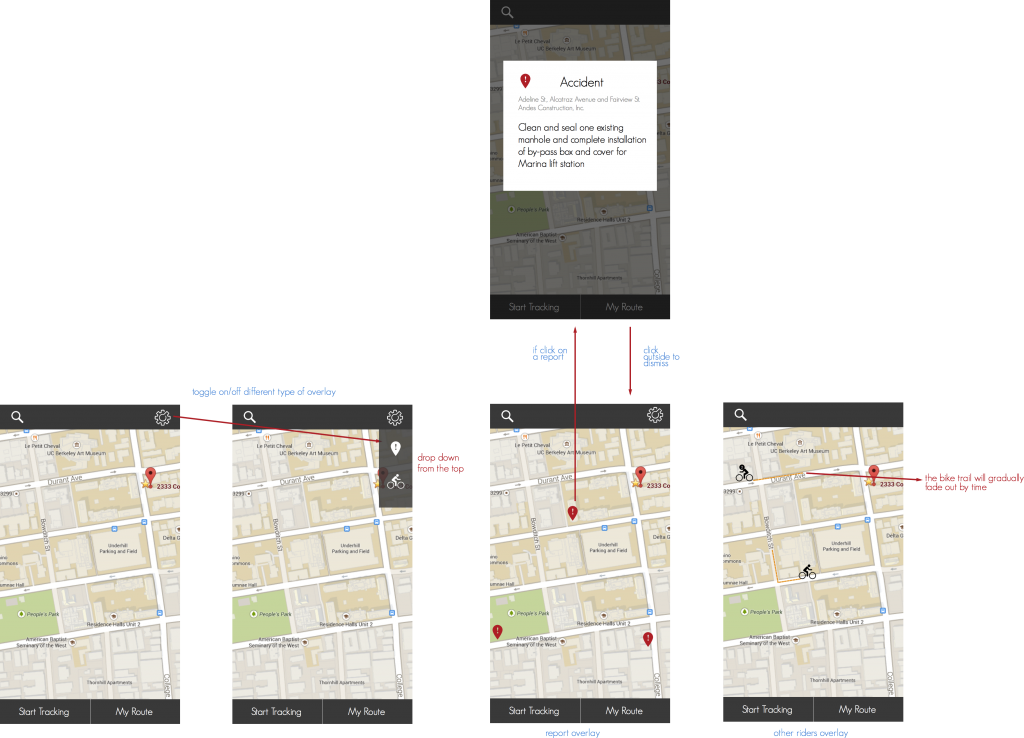 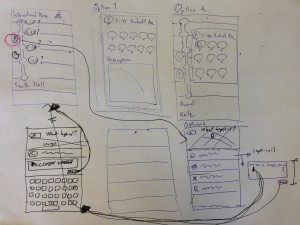 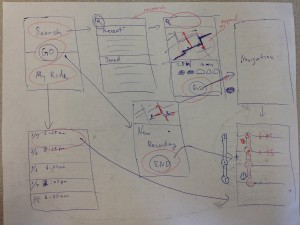 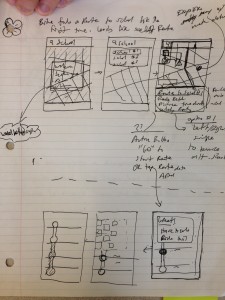 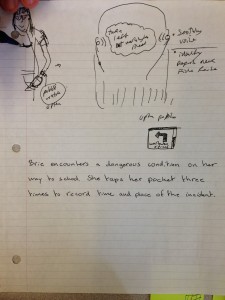 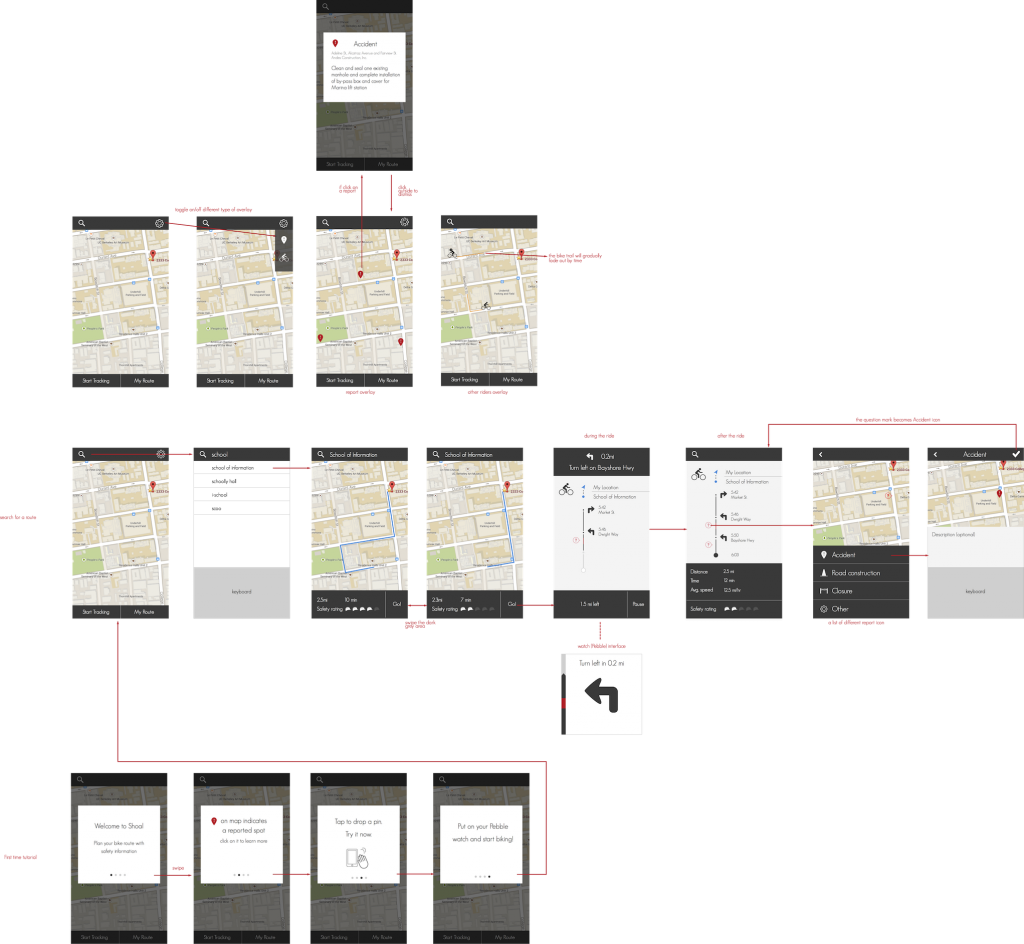 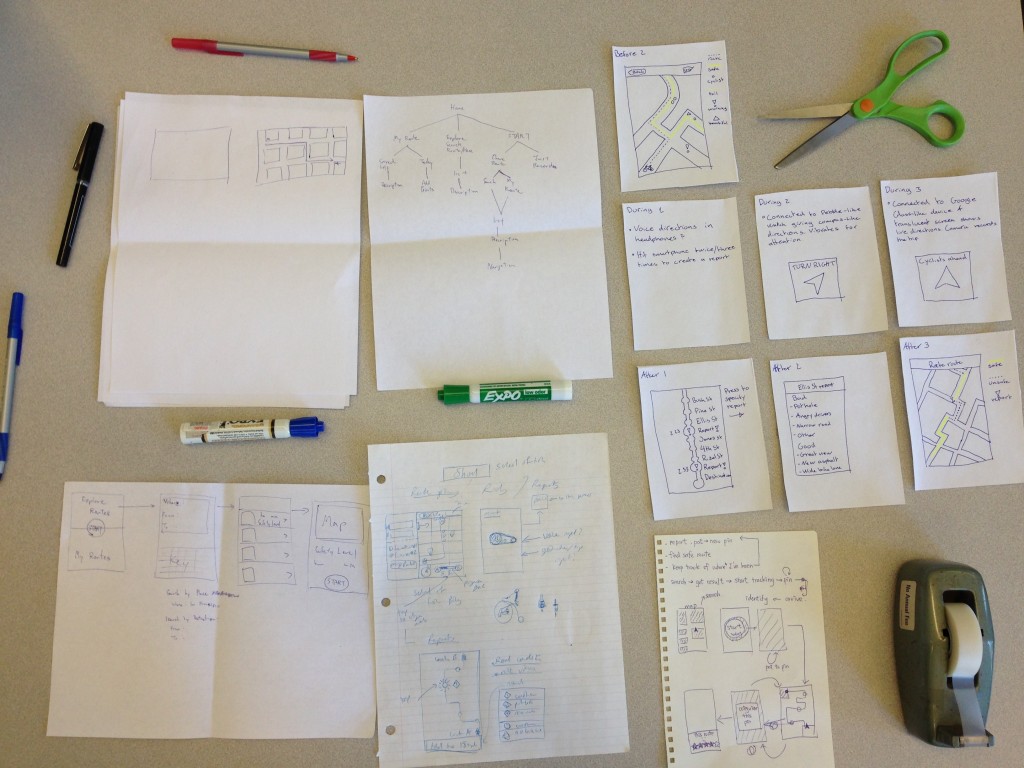 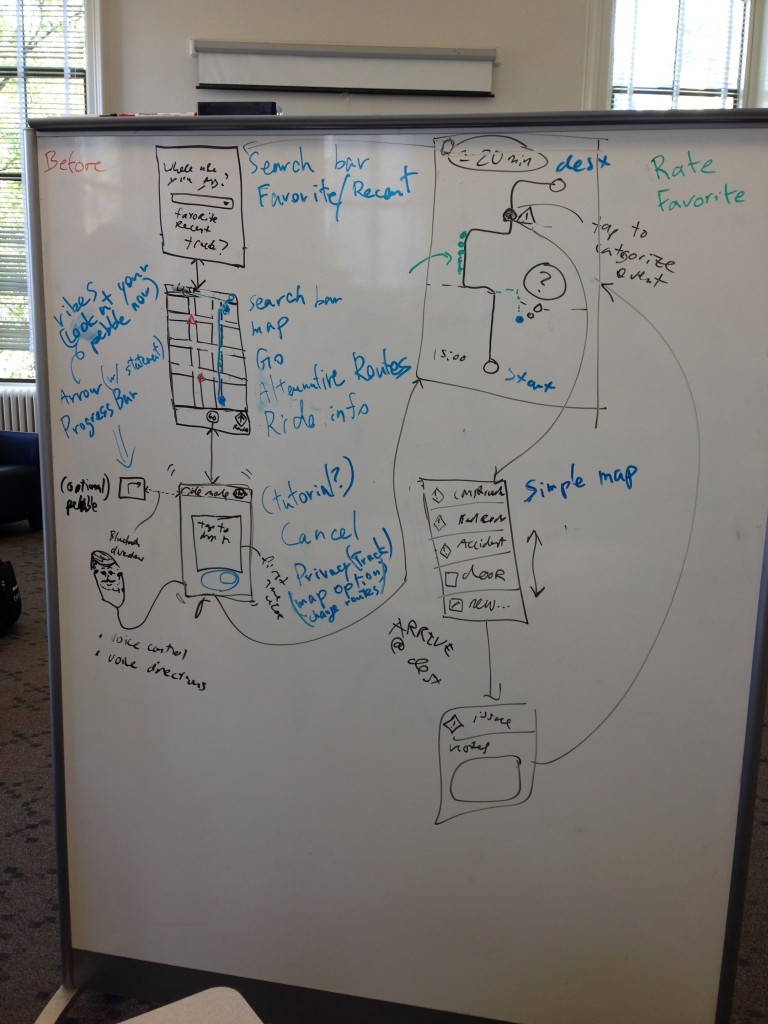 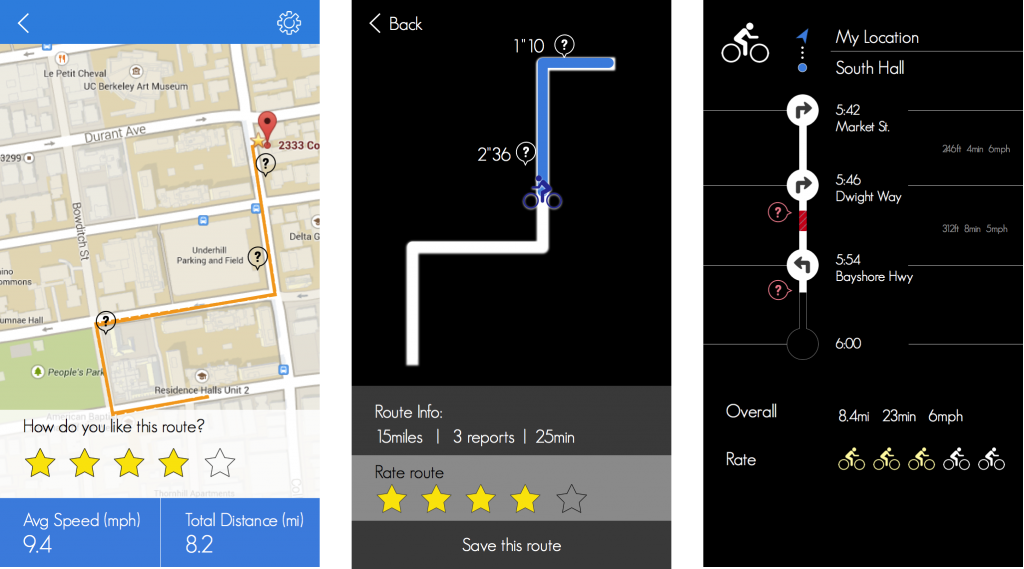 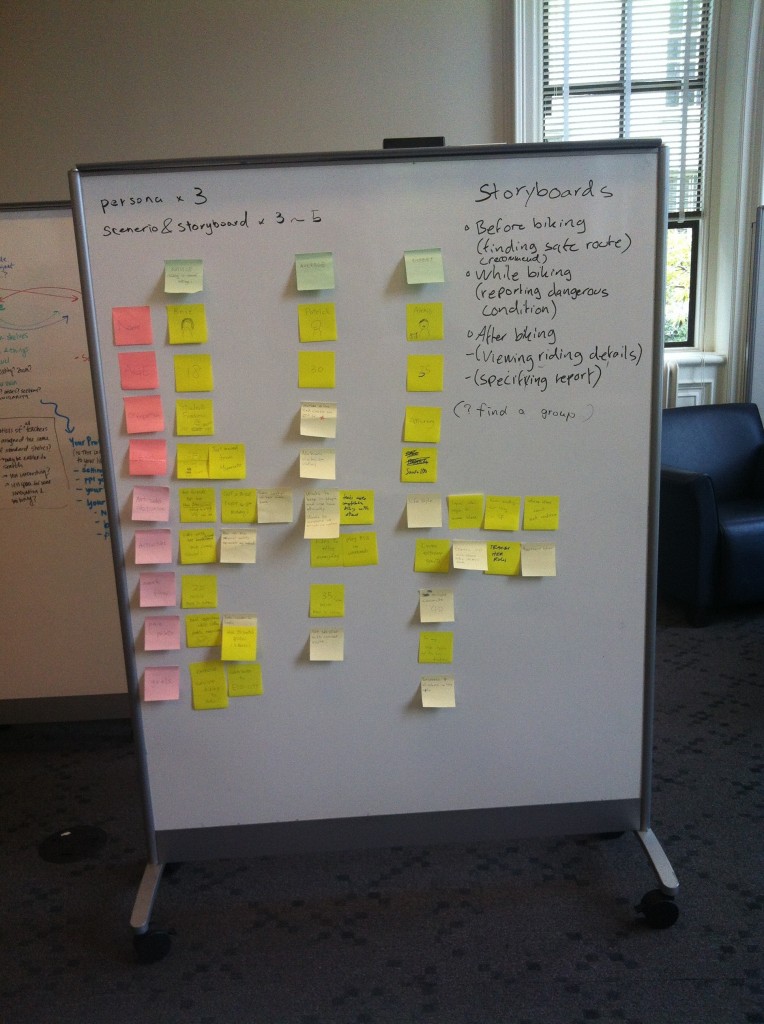 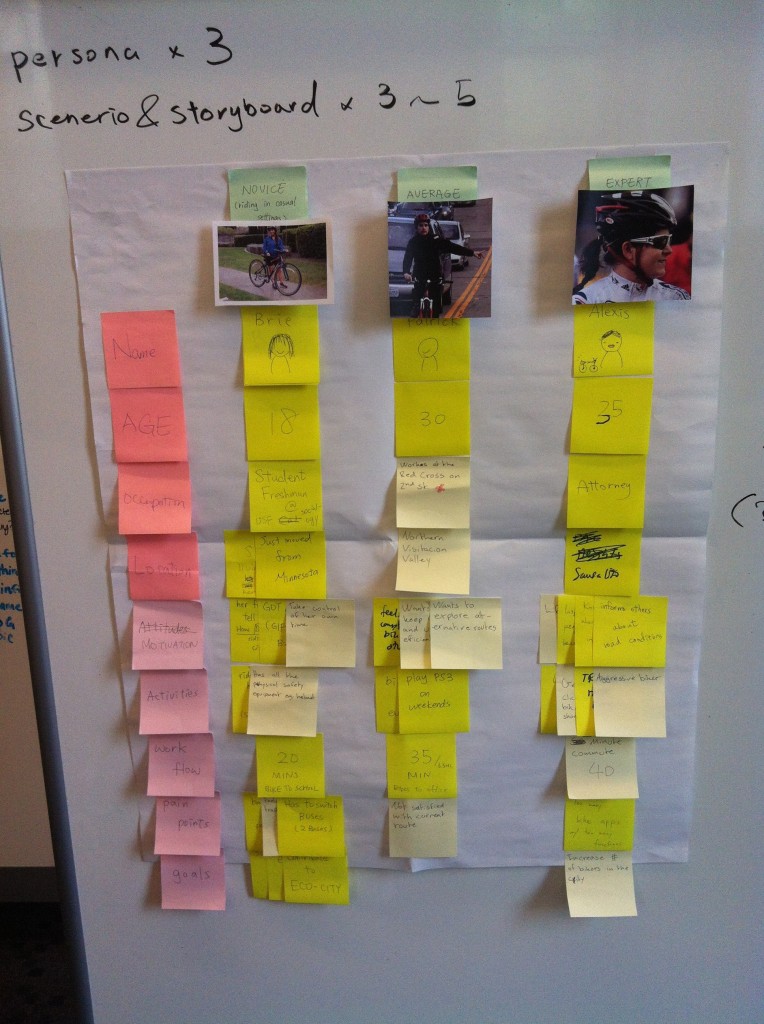 Brie is an 18 year old college freshman studying sociology at USF. She recently moved to San Francisco where she lives with her aunt for financial reasons. Currently she is commuting to class by bus, but the bus stop is not close to her house and she has to transfer mid way. She got a bike for her 18th birthday, but has had a few bad experiences on the heavily trafficked streets of SF. Although she has acquired safety equipment such as helmet, lights and rear view mirror she feels unsafe commuting to school every day. She finds this very annoying since she likes to be in control of her own life and time and biking would save her around 40 minutes a day in transportation.

Patrick, a 30 year old college graduate, works in downtown San Francisco as project manager at the Red Cross. He has been working there for 5 years and has been commuting back and forth from his apartment in Northern Visitacion for the last three. The ride takes him 35 minutes each way and he is comfortable riding on his usual route. Lately he has felt a bit bored by his daily routine and wants to explore alternative routes for the views and different impressions. He has tried to change his route a couple of times in the past but every time he has run in to unexpected traffic or dangerous circumstances making the experience less pleasant.

Alexis is an attorney in her mid 30’s living in Sausalito and working in downtown SF. She spends most of her time during the week at the office, so when the weekend arrives she wants to spend her time outside exploring and exercising. Ideally she would have the time and the money to practice extreme sports, but she finds biking to be a good alternative. Most weekends she bikes between 40 and 90 miles with or without her bike savvy friends. No matter what she never forgets to track her bike rides with various apps keeping her smartphone in the back pocket of her biking jersey. She also wears her biking outfit and uses her sports bike on her long commute to work. She describes herself as an aggressive biker and knows the conditions of practically every street of SF. Biking has become a big part of her identity and she is very keen to share her biking experiences trying to get the people she meets to start biking.