Protests in the Era of Data Surveillance
By Niharika Sitomer | June 16, 2022

Modern technology is giving law enforcement the tools to be increasingly invasive in their pursuit of protesters – but what can we do about it? 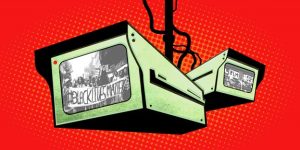 In the summer of 2020, the country exploded with Black Lives Matter protests spurred by the murder of George Floyd. Even today, the wave of demonstrations and dissent has not ended, with many protests cropping up regarding the recent developments on the overturning of Roe v. Wade and the March for Our Lives events in response to gun violence tragedies. These movements are a sign of robust public involvement in politics and human rights issues, which is a healthy aspect of any democracy and a necessary means of holding governing bodies accountable. However, the use of technological surveillance by law enforcement to track protesters is a dangerous and ongoing occurrence that many may not even realize is happening.

The use of facial recognition technology poses a significant threat for wrongful arrests of innocent people due to misclassification by untested and unfairly developed algorithms. For instance, the software used by the London Metropolitan Police achieved only 19% accuracy when tested by Essex University. Moreover, many of these algorithms do not have adequate racial diversity in their training sets, leading the software to err and wrongfully classify mostly on racial minorities. The locations of deployment for facial recognition systems outside of protests are also extremely racially determined, with the brunt falling disproportionately on black neighborhoods. This represents a huge disparity in policing practices and increases the likelihood that innocent black citizens will be misidentified as protesters and arrested. What’s more, the use of facial recognition by law enforcement is largely unregulated, meaning that there are few repercussions for the harms caused by these systems.

It is not only the threat of uninvolved people being targeted, however, that makes police surveillance so dangerous. People who attend protests without endangering public safety are also at risk, despite constituting the vast majority of protesters (93% of summer 2020 protests were peaceful, and even violent protests contain many non-violent protesters). Drone footage is frequently used to record and identify people in attendance at protests, even if their actions do not warrant such attention. Perhaps even more concerning are vigilante apps and the invasion of private spaces. During the George Floyd protests, the Dallas Police launched an app called iWatch, where the public could upload footage of protesters to aid in their prosecution. Such vigilante justice entails the targeting of protesters by those who oppose their causes and seek to weaken them, even if doing so results in unjust punishments. Additionally, LAPD requested users of Ring, Amazon’s doorbell camera system, to provide footage of people who could potentially be connected to protests, despite it being a private camera network where people were unaware they could be surveilled without a warrant. Violations of privacy also occur on social media, as the FBI has requested personal information of protest planners from online platforms, even if their pages and posts had been set to private.

One of the most invasive forms of police surveillance of protesters is location tracking, which typically occurs through RFID chips, mobile technology, and automated license plate reader systems (ALPRs). RFID chips use radio frequencies to identify and track tags on objects, allowing both the scanning of personal information without consent and the tracking of locations long after people have left a protest. Similarly, mobile tracking uses signals from your phone to determine your location and access your private communications, and it can also be used at later times to track down and arrest people who had been in attendance at previous protests; such arrests have been made in the past without real proof of any wrongdoing. ALPRs can track protestors’ vehicles and access databases containing their locations over time, effectively creating a real-time tracker. 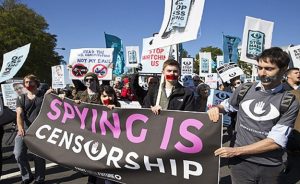 You can protect yourself from surveillance at protests by leaving your phone at home or keeping it turned off as much as possible, bringing a secondary phone you don’t use often, using encrypted messages to plan rather than unencrypted texts or social media, wearing a mask and sunglasses, avoiding vehicle transportation if possible, and changing clothes before and after attending. You should also abstain from posting footage of protests, especially that in which protesters’ faces or other identifiable features are visible. The aforementioned methods of law enforcement surveillance are all either currently legal, or illegal but unenforced. You can petition your local, state, and national representatives to deliver justice for past wrongs and to pass laws restricting police from using such methods on protesters without sufficient proof that the target of surveillance has endangered others.