Time flies when ISPs are having fun
By Anonymous | October 29, 2021

More than four years have passed since US Congress repealed FCC rules bringing essential privacy protections to ISP consumers. This is a matter affecting millions of Americans, and measures need to be taken so consumers are not left at their own peril and big corporations’ mercy while accessing the Internet.

In March 2017, as the country transitioned from Obama’s 2nd term to newly
elected President Trump, without much alarm the, US Congress repealed regulation providing citizens with privacy protections when using ISP and broadband services. The main area concerning the regulation was to inhibit ISP appetite to freely collect, aggregate and sell consumer data, including web browsing history.

The repeal was a massive victory for ISPs such as Verizon, Comcast and AT&T and a blow to consumers’ privacy rights. Not only was the “wild west” privacy status quo maintained, but it also impeded the FCC from trying to submit any similar regulations to congress (!) in the future.

The main argument for repealing this regulation was the FTC traditionally being the agency regulating corporate/business privacy affairs. Also by regulating ISPs, it was argued the FCC would put them at disadvantage when compared to FTC regulated web services such as Google, Apple, Yahoo and such. Never mind the ISP business model is based on charging for access and bandwidth, not monetization via data brokerage or advertising services. And never mind FCC newly appointed chair – Ajit Pai – who recommended for voting against its own regulatory agency, was a former lawyer for Verizon.[1]

So four years have passed and the FTC has not issued, nor it is expected to issue any robust privacy regulatory frameworks on ISP privacy. Consumers are left into privacy limbo and states scrambling to pass related laws [2]. How bad is it, and can can be done?

The Internet – a network of networks – is an open architecture of technologies
and services, where information flows thru its participant nodes in little
virtual envelopes called “packets”\*. Every information-containing packet
passing thru any of the network’s edges (known as routers), can be inspected and have its source address, destination address and information content (known as payload) known.

Since the ISP is your first node entering the Internet (also known as default
gateway), this node presents a great opportunity to collect data about everything sent or received by households. This complete visibility risk is only mitigated by the usage of encryption, which prevents any nodes (except the sender and receiver) from seeing packets’ contents. As long as encryption is being used (think of HTTPS, for example), payload is not visible to ISPs.

The good news is that encryption is becoming more pervasive across all internet domains. As of early 2021, 90% of internet traffic is encrypted, and the trend is still upward. 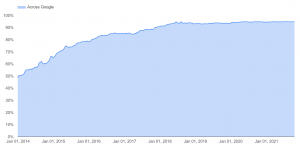 But even with encryption present ISPs can collect a lot of information. ISPs
have to route your packages after all, so they know exactly with whom you are
communicating to and from, along with how many packages are being exchanged and their timestamps. ISPs can easily deduct when one is for, example, watching Netflix movies, despite your communication to Netflix being encrypted.

In addition to the transport of information packets per se, there is another
venue ISPs use to collect data: Domain Name Services (DNS). Every time one needs to go to a domain (say by visiting URL [www.nyt.com](http://www.nyt.com)), the translation of that domain to routable IP addresses is visible to the ISP, either by it providing the DNS service (which usually is a default setting), or examining DNS traffic (TCP port 53). ISPs can easily collect important web browsing usage in this fashion.

Beyond what is known to be used by ISPs to collect usage data, some technologies could also be used. ISPs could use technics such as sophisticated traffic fingerprinting [3] and in extreme cases even deep packet inspection, or other some nefarious techniques such as Verizon’s infamous X-UIDH’s [4]. Fingerprinting is how for example, ISPs were supposed to detect movies being shared illegally via torrent streams, a failed imposition by the Record Industry Association of America (RIAA) [5]. While it is speculative that ISPs could be resorting to such technologies, it is important to notice that abuses by ISPs occurred in the past, so without specific regulations, the potential danger remains.

Since our legislators failed to protect us, ‘some do-it-yourself work is
needed’. And some of these actions requite a good level of caution.

Opt-in was one of the most important FCC provisions repealed in 2017, so an
opt-out action from the consumer is needed: 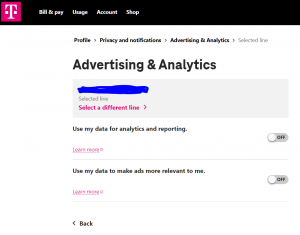 Another measure is to configure your home router (or each individual device) so it no longer uses the ISP as the DNS server, and make DNS traffic encrypted. Here one needs to be careful selecting a DNS provider, otherwise you are at the mercy of the same privacy risks. Make sure you select a DNS service with good privacy. For example CloudFlare DNS (server “1.1.1.1”) privacy can be found here: developers.cloudflare.com/1.1.1.1/privacy/public-dns-resolver

For a complete “cloak” of your traffic, making it virtually invisible to the ISP
one can use a VPN services. These services will make internet traffic extremely difficult for your ISP to analyze. Except for volumetrics, the ISP will not have much information about your traffic. The drawback is that a VPN service provider in turn can see all your traffic, just like the ISP. So one has to be EXTREMELY diligent selecting this type of services. Some of these providers are incorporated abroad in countries with lax regulations, with varying degrees of privacy assurance. For example, vendor NordVPN is incorporated and regulated in Panama, while “ExpressVPN” has its privacy independently audited by renowned company PwC.