In the ongoing battle to provide more tracking and tools to identify consumers buying habits, Apple has decided to take a different approach and limit the ability of many companies to track your data without your permission. In this multi-billion dollar a year industry, Apple has indicated that it would release what it calls App Tracking Transparency (ATT) across iOS, iPadOS, and TVOS. This feature is expected to launch early spring 2021 to combat the digital surveillance economy.

How do advertisers track me anyway?

People go about their lives every day without realizing just how much data internet giants have collected. When iPhone users use an app to look at the weather, a Facebook post or another app on your iPhone, advertisers use an identifier called Identifier for Advertisers (IDFA) to track the user’s online behavior across multiple apps. This IDFA is a random device identifier assigned by Apple to a user’s device. It is used by companies to determine your location, what websites you visit, and other pertinent info without obtaining access to a user’s personal information. Companies use this information to sell marketing adds to individuals they are able to track, thus monetizing the data that they collected based on your own individual habits. Interestingly, Apple created the IDFA as a result of being sued for sharing user information without limitation via the UDID (Unique Device Identifier).

Why do I need ATT if Apple already has App Privacy Labels in the App Store?
Currently, Apple has what it calls Privacy Nutrition Labels in the Apple App store. These nutrition labels give iPhone users a snippet of what data apps collect and how they use this data. However, these privacy labels are currently based on self-reporting by app developers. There’s no verification by Apple or by any other source to determine whether or not an app is falsely using your data. Users should use caution when reviewing these labels as they may not be able to trust what apple and the privacy label says in the app store. Many apps in the app store that say that they are not sharing your data, but they could be.

Aren’t There Privacy Frameworks and Privacy Laws to Protect Me?
Many users are concerned about their privacy. Privacy frameworks and privacy laws such as The Belmont principles, CALOPPA, CCPA and the FTC were enacted to protect an individualÕs rights. While these privacy frameworks and laws focus on many privacy areas, two core tenants are choice for consumers and greater transparency. Due to the explosion of big data and online apps, many app developers and internet companies have skirted many of these laws and frameworks. In a limited unscientific study where users were specifically asked to read a privacy policy for a specific company, users indicated that the privacy policy is “too long”, and they said that they “assume that the privacy policy has good intentions.” 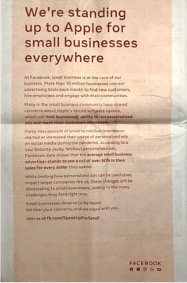 In the tech giant war, Facebook took out a full-page ad indicating that Apple’s ATT would harm businesses. In the article “New Apple Privacy Features Will Be Hard on Small Businesses: Curtailing the collection of user data” may mean big spending for small developers, the author does not share any data on how small companies will be impacted other than stating that small business other than Facebook and Google have smaller budgets and they need to gather information to target their users. Further research did not yield any additional insights regarding how small firms would be hurt. The bigger story here is that Facebook has taken a stand against this privacy policy since Facebook stands to lose millions due its billion dollar digital advertising revenue stream.

In summary
We’ve been told that to get better services from internet companies, we need to give up more of our data. While this may be true, consumers should have the right to choose. While one can’t be sure of Apple’s motives to limit user tracking on the iPhone, it is already yielding tangible results since LinkedIn and Google indicated that they would stop collecting IDFA data on iOS. This seems to be a welcomed approach to the wild, wild west of collecting, using and monetizing one’s data without permission. Apple’s policy seems to strike the right balance between giving users choice to determine how their data is used by individual apps. Ultimately, as a user of the iPhone, you get to decide.