Can there truly be ethics in autonomous machine intelligence?
By Matt White, October 30, 2020

Some would say that we are in the infancy of the fourth industrial revolution, where artificial intelligence and the autonomy it is ushering in are positioned to become life-altering technologies. Most understand the impacts of autonomous technologies as it relates to jobs, they are concerned that autonomous vehicles and robotic assembly lines will relegate them to the unemployment line. But very little thought and conversely research has been done into the ethical implications of autonomous decision making that these systems are confronted with. Although there are far reaching ethical implications with AI and automation there are opposing views of who is truly responsible for the ethical decisions made by an autonomous system. Is it the designer? The programmer? The supplier of the training data? The operator? Or should the system itself should be responsible for any moral or ethical dilemmas and their outcomes.

Take for instance the incident with Uber’s self-driving car a few years ago, where one of its cars killed a pedestrian crossing the road in the middle of the night. The vehicle’s sensors collected data which revealed it was aware of a person crossing in front of its path, but the vehicle took no action and struck and killed the pedestrian. Who is ultimately responsible when an autonomous vehicle kills a person? In this case it was the supervising driver but what happens when there is no driver in the driver seat? What if the vehicle had to make a choice like in the trolley problem, between hitting a child or hitting a grown man? How would it make such a challenge moral decision?

A car parked on a city street 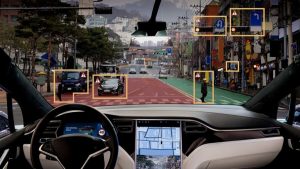 The Moral Machine, a project from MIT’s Media Lab is tackling just this, developing a dataset on how people would react to particular moral and ethical decisions where it comes to driverless cars. Should you run over 1 disabled person and 1 child or 3 obese people, or should you crash yourself into a barrier and kill your 3 adult passengers to save two men and two women of a healthy weight pushing a baby? However, the thought that autonomous vehicles will base their decisions of morality on crowd-sourced datasets of varying moral perspectives seems absurd. Only those who participate in the process will have their opinions included, anyone can go online and contribute to the dataset without any form of validation, and not withstanding all of the opinions that are not included, there are various moral philosophy theories that could be applied to autonomous ethical decision making that would overrule rules derived from datasets. Does the system follow utilitarianism, Kantianism, virtue ethics, so forth? Although the Moral Machine is considered to be a study in its current incarnation, it uses a very primitive set of parameters (number of people, binary gender, weight, age, visible disability) to allow users to determine the value they place on human life. In real life, real people have more than these handful of dimensions like race, socio-economic status, non-binary gender, and so forth. Could adding these real-life dimensions create a bias that would further de-value people who might meet certain criteria and be in the way of an autonomous vehicle? Might the value placed on a homeless person by less than that of a Wall street stockbroker? 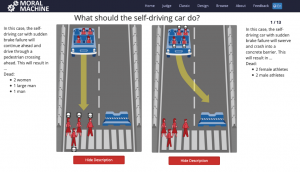 There is certainly a lot to unpack here, especially if we change contexts and look at armed unmanned autonomous vehicles (AUAVs) which are used in warfare to varying degrees. As we transition from remote pilots to fully autonomous war machines, who makes the decision whether to drop a bomb on a school containing 100 terrorists and 20 children? Does the operator absolve himself of any responsibility when the AUAV makes the decision to drop a bomb and kill innocent people? Does the programmer or the trainer of the system bear any responsibility?

As you can see the idea of ethical decision making by autonomous systems is highly problematic and presents some very serious challenges that require further research and exploration. Systems that are designed to have a moral compass will not be sufficient, as they will adopt the moral standpoint of its creators. Training data is likely to be short-sighted, shallow in dimensions and biased based on the ethical standpoints of its contributors. It is obvious that the issue of ethical decision making in autonomous system needs further discourse and research in order to ensure that future systems that we come to rely on can make ethical decisions in a manner that demonstrates no bias; or perhaps we may have to accept that in fact autonomous machines will not be able to make ethical decisions in an unbiased manner.