Data is often analogized with transaction. We formulate our interactions with tech companies as an exchange of our data as payment for services, which in turn allow for the continued provision of those services.

Metaphors like these can be useful in that they allow us to port developed intuitions from a well-trodded domain (transactions) to help us navigate more less familiar waters (data). In this spirit, I wanted to further develop this “data collection = economic transaction” metaphor, and explore how our perceptions of data collection change with a slight tweak: “data collection = taxation” 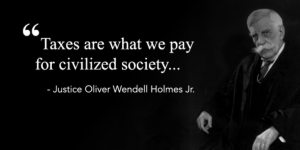 In the context of data collection, the following quote from Supreme Court Justice Oliver Wendall Holmes might give one pause. Is this applicable, or entirely irrelevant?

Here’s what I mean: with taxation, government bodies mandate that citizens contribute a certain amount of resources to fund public services. The same goes for data – while Google, Facebook, and Amazon are not governments, they also create and maintain enormous ecosystems that facilitate otherwise impossible interactions. Governments allow for a coordination around national security, education, and supply chains, and Big Tech provides the digital analogues. Taxation and ad revenue allow for the perpetual creation of this value. Both can embody some (deeply imperfect) notion of “consent of the governed” through voter and consumer choice, although neither provides an easy way to “opt out.”

Is this metaphor perfect? Not at all, but there is still value in making the comparison. We can recycle centuries of bickering over fairness in taxation.

For instance, one might ask “when is taxation / data collection exploitative?” On one end, some maintain that “all taxation is theft,” a process by which private property is coercively stripped. Some may feel a similar sense of violation as their personal information is harvested – for them, perhaps the amorphous concept of “data” latches onto the familiar notion of “private property,” which might in turn suggest the need for some kind of remuneration.

At the other extreme, some argue that taxation cannot be the theft of private property, because the property was never private to begin with. Governments create the institutions and infrastructure that allows the concept of “ownership” to even exist, and thus all property is on loan. One privacy analogue could be that the generation of data is impossible and worthless without the scaffolding of Big Tech, and thus users have a similarly tenuous claim on their digital trails.

The philosophy of just taxation has provided me an off-the-shelf frame by which to parse a less familiar space. Had I stayed with the “data collection = economic transaction” metaphor, I would have never thought about data from this angle. As is often the case, a different metaphor illuminates different dimensions of the issue.

Insights can flow the other way as well. For example, in data circles there is a developing sophistication around what it means to be an “informed consumer.” It is recognized by many that merely checking the “I agree” box does not constitute a philosophically meaningful notion of consent, as the quantity and complexity of relevant information is too much to expect from any one consumer. Policies and discussions around the “right to be forgotten”, user control of data, or the right to certain types of transparency acknowledge the moral tensions inherent in the space.

These discussions are directly relevant to justifications often given for a government’s right to tax, like the “social contract” or the “consent of the governed.” Both often have some notion of informed consent, but this sits on similarly shaky ground. How many voters know how their tax dollars are being spent? While government budgets are publicly available, how many are willing to sift through reams of legalese? How many voters can tell you what military spending is within an even order of magnitude? Probably as many as who know exactly how their data is packaged and sold. The data world and its critics have much to contribute to the question of how to promote informed decision-making in a world of increasing complexity.

Linguists George Lakoff and Mark Johnson suggest that metaphors are central to our cognitive processes.

Of course, all of these comparisons are deeply imperfect, and require much more space to elaborate. My main interest in writing this was exploring how this analogical shift led to different questions and frames. The metaphors we use have a deep impact on our ability to think through novel concepts, particularly when navigating the abstract. They shape the questions we ask, the connections we make, and even the conversations we can have. To the extent that that’s true, metaphors can profoundly reroute society’s direction on issues of privacy, consent, autonomy, and property, and are thus well-worth exploring.