To Broadcast, Promote, and Prepare: Facebook’s Alleged Culpability in the Kenosha Shootings
By Matt Kawa | October 9, 2020

The night of August 25, 2020 saw Kenosha, WI engrossed with peaceful protests, riots, arson, looting, and killing in the wake of the shooting of Jacob Blake. In many ways Kenosha was not unlike cities all around the country facing protests both peaceful and violent sparked by the killing of George Floyd and others by police forces. However, Kenosha manages to distinguish itself by the fact that in the midst of the responses to the untimely death of these individuals, more individuals were killed. Namely, two protestors were shot and killed, and another injured, by seventeen-year-old Antioch, IL resident, Kyle Rittenhouse.

Rittenhouse was compelled and mobilized to cross state lines, illegally (as a minor) in possession of a firearm, to “take up arms and defend out City [sic] from the evil thugs” who would be protesting, as posted by a local vigilante militia that calls themselves the Kenosha Guard. The Kenosha Guard set up a Facebook event (pictured below) entitled “Armed Citizens to Protect our Lives and Property” in which the administrators posted the aforementioned quote (also pictured). 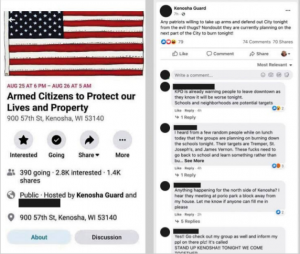 In addition to egregious proliferation of racist and antisemitic rhetoric, the administrators of these Facebook groups blatantly promote commission of acts of violence against protestors and rioters, not only via the groups per se, but on their personal accounts as well. 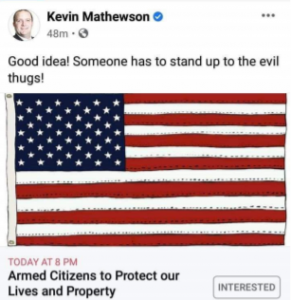 On September 22, a complaint and demand for jury trial was filed by the life partner of one of Rittenhouse’s victims and three other Kenosha residents with the United States District Court for the Eastern District of Wisconsin against shooter Kyle Rittenhouse, Kyle Matheson, “commander” of the Kenosha Guard, co-conspirator Ryan Balch a member of a similar violent organization called the “Boogaloo Bois,” both organizations per se, and most surprisingly, Facebook, Inc. 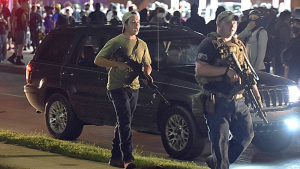 The complaint effectively alleges intentional negligence on behalf of Facebook for allowing the vigilantes to coordinate their violent presence unchecked. The claim states that Facebook “provides the platform and tools for the Kenosha Guard, Boogaloo Bois, and other right-wing militias to recruit members and plan events.” In anticipation of the defense of ignorance, the complaint then cites that over four hundred reports were filed by users regarding the Kenosha Guard group and event page expressing concern that members would be seeking to cause violence, intimidation, and injury. Reports containing speculation which, as the complaint summarizes, ultimately did transpire.

While Facebook CEO Mark Zuckerberg did eventually apologize for his platforms role in the incident, calling it an “operational mistake” and removing the Kenosha Guard page, the complaint claims that as part of an observable pattern of similar behavior, Facebook “failed to act to prevent harm to Plaintiffs and other protestors” by ignoring material numbers of reports attempting to warn them. 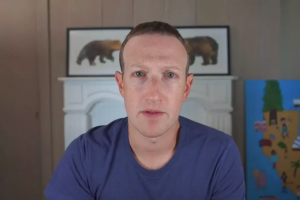 Ultimately, the Plaintiffs’ case rests on the Wisconsin legal principle that, “A duty consists of the obligation of due care to refrain from any act which will cause foreseeable harm to others . . . . A defendant’s duty is established when it can be said that it was foreseeable that [the] act or omission to act may cause harm to someone.” Or, simply put, Facebook had a duty to “stop the violent and terroristic threats that were made using its tools and platform,” including through inaction.

Inevitably, defenses will be made on First Amendment grounds, claiming that the Kenosha Guard and Boogaloo Bois, and their leaders and members, were simply exercising their right to freedom of speech, a right Facebook ought to afford its users. However, the Supreme Court has interpreted numerous exceptions into the First Amendment including quite prominently forbidding of incitement to violence. Whether Facebook has a moral obligation to adjudicate First Amendment claims is less clear cut. But the decision must be made in the modern, rapidly evolving world of social media as to what the role of the platform is in society and what ought or ought no be permissible enforcement of standards across the board.

The full text of the complaint can be found here.