For many trans people, especially trans people of color, visibility is fraught with contradictions. Who gets to be seen as their full selves? Who is forced to be hyper visible? These contradictions are reflected in the processes of the United States’ surveillance mechanisms that continue to police and enact administrative violence on trans communities. While trans people are disproportionately affected by the rise of surveillance technologies, such as facial recognition, another pervasive element of the surveillance state is identity documentation. Cross-referenced throughout many databases, identity documentation serves as an access-point into many of the rights conferred by citizenship, both formally and informally. 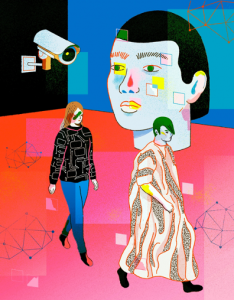 Policing Trans as a Category
The category of trans has been one that has consistently been policed through formal mechanisms of identification by the state, as well as through social interactions with those who carry the administrative power of the state (e.g. police officers, Transportation Security Administration (TSA) agents, doctors, etc). In order to obtain or change identity documents, many trans people in the United States must obtain doctor’s notes that document their “proper” transition, which historically has been prescribed as one’s ability to conform to norms of whiteness, class privilege, heterosexuality, and able-bodiedness. This poses many problems for trans and gender nonbinary people who cannot conform to these prescriptions of normative gender, do not have the financial or material means to medically transition, do not desire to medically transition, or any combination of the above. Doctors, then, serve as one of the gatekeepers to access to identity-aligned documents. In the 2015 National Transgender Discrimination Survey report, one third of respodents had none of their identity documents updated to align with their gender identity. The consequences of these barriers and practices that make trans people both invisible and hypervisible simultaneously are dangerous. 40% of people who presented an ID that did not appear to match their gender expression were harassed , 15% were asked to leave the establishment, and 3% were physically assaulted.

Additionally the data that is used “as part of these legal processes (along with any form requiring one to identify as a specific gender) form a paper trail through which state agencies [and other private entities] may track, assess, and manage transgender people” (Beauchamp, 2014). These paper trails expose the trans community to the dangers of hypervisibility by the state, which has historically played a large role in the violence enacted on them, whether it be through acts of police violence to housing discrimination.

Identification & Post-9/11 Surveillance Policies
In the post-9/11 era, we have seen an expansion and bolstering of the surveillance state in more visible and explicit ways. Even in technologies and processes that do not explicitly seek to target or harm trans and gender nonbinary communities, it has been found that these surveillance practices disproportionately harm those exact communities. The heightened scrutiny of identity documents due to the United States’ “War on Terror” policies has led to targeting of particularly trans people of color, trans immigrants, and low-income trans people, who are more likely to have inconsistent identity documents. Deeply connected to formations of who is deemed as a citizen versus alien, these surveillance policies work in a nexus of neoliberalism, white supremacy, and cisheteronormativity. For trans and gender nonbinary communities, the lack of access to “proper” and “accurate” documentation excludes them from access to basic needs, such as work or public spaces, and subjects them as undesirable aliens that need to be policed and surveilled. 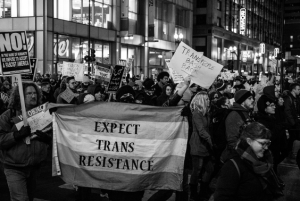 Fig. 2: A black and white photo of a crowd of protestors with the words “Expect Trans Resistance” printed on a trans flag.

Revealing how the surveillance state continues to violate and harm trans and gender nonbinary communities through technologies that seem as benign as identity documentation calls into question what liberation would look like. This does not include neoliberal reforms that nod at inclusion into a violent state apparatus. Rather, looking to the continued legacy of radical trans politics from riots against state violence at Compton’s Cafeteria to Stonewall, trans and gender nonbinary communities have been working to dismantle these systems of power that systemically harm them and creatively imagine and build new systems that allow them to thrive.