In the modern days, we are not surprised by the fact that the technologies we are using everyday are collecting our personal data to some extent. The data they are collecting could be what we click on the webpage, or keywords we search for. We understand that tech companies collect data in order to improve the technology and for the advertisement reasons. But do we know what exactly they are collecting? Do we give consent to them at all?

Some of the apps, like Expedia, Hotel.com, and Air Canada, have reported to work with a customer experience analytics firm called Glassbox to collect users’ every tap and keyboard entry by recording the screen. Glassbox’s recording technology allows the companies to do analysis on the data by replaying the screenshots and records. However, sensitive data like passport numbers, banking information and passwords could be exposed in the screenshots as well. There was an incidence that Glassbox failed to encrypt the sensitive data and resulted in exposing 20,000 files to whoever has the access to the database.

We would assume that this should be communicated with the users before downloading and starting to use their apps. However, the Term of Service for Expedia, Hotel.com, and Air Canada, does not mention any of the screen recording action they are conducting in the document. It seems like they are purposely not being transparent and honest about the data collection process. The users would have no idea about what the app is doing in the back just from the document itself. Luckily, Apple has found out this issue and sent out a notice to the companies who conduct screen recordings for analytics through Iphone Apps. Apple told them in an email to remove the code that does the screen recording work immediately. Otherwise, the app would be taken down from the app store. 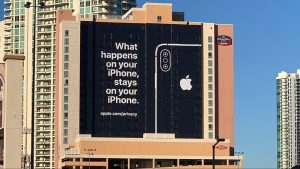 I found it rather ironic that the companies only started to take actions not because of the laws or policies of our government but a private company like Apple. Why is Apple the one who is guarding our data privacy but not our government? It seems like the issue is that the technology is moving too fast but the lawmaking process is moving too slow. The law couldn’t and don’t know how to regulate companies’ data collection process. There is also no penalty for the companies if they are not being honest or transparent about the data collection process in Term of Service or other documents.

We enjoy the benefits and convenience of cutting-edge technologies every single day. However, our laws are rather behind when it comes to protecting the users’ privacy and forcing the companies to be transparent and honest on their work. In comparison, the EU is doing a much better job on regulating the companies and protecting the citizens’ rights. Hopefully in the near future, we can find a balance among technologies, privacy and security.

Many popular iPhone apps secretly record your screen without asking