Which smart city initiatives are appropriate?
By Anonymous | November 1, 2019

In countries with high speed internet connections, Internet of Things (IoT) is becoming more integrated in everyday lives. Statista, a database company, states that the revenue generated in the US smart home market in 2019 is expected to be $23,577m, which is a $3,931m or 20.0% increase from 2018. Now, more urban areas have been engaging in smart city initiatives.

Smart city initiatives can include a wide range of tools and services. PrePol in LA which used predictive analytics to identify individuals likely to commit crimes based on data and facial recognition being banned for government use in four US cities are two examples of IoT and analytics tools that raise concerns due to personal data collection and potential bias from the tools that can bring more harm than good.

However, IoT in general has been a growing initiative in many cities around the world to increase efficiency and safety. For example, In July 2018, International Data Corporation (IDC) forecasted smart city spending to be $158billion in 2022 and in July 2019, IDC forecasted a $189billion spending on smart city initiatives in 2023. These smart city initiatives usually include some of the following areas: energy, transportation, internet access, real time information, etc. Amsterdam, Barcelona, Singapore, South Korea, and the United States have all invested resources in smart city projects. 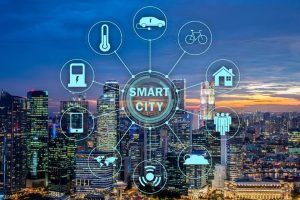 Amsterdam, Netherlands has been engaged in smart city efforts prior to 2010 and is still continuing to this day. Government led projects as well as public-private platforms, one specifically called the Amsterdam Smart City (ASC) initiatives, helped transform Amsterdam through a combination of technological and data driven changes. In 2011 the city saw a 13% energy savings on average from16 projects which provides the potential for a “green” environment when the number of projects are scaled-up. Additional projects include analyzing crowd movements to improve crowd control, observing areas of rainfall to measure impact of flooding on traffic situations, and assessing social media posts to improve tourists and resident experience in Amsterdam by providing status updates on lines or transportation delays.

On March 13, 2019, Seoul, South Korea’s government discussed 18 projects that will use big data and information and communication technology (ICT) to turn Seoul into a smart city. A few types of IoT devices that are planned to be installed include 50,000 sensors to collect fine dust information, 500 spaces and sensors in 2019 (3,000 spaces by 2022) for shared parking and applications for parking payment, and 17,820 intelligent closed-circuit TV cameras (CCTV) to alert police or firefighters real-time. In this case, the CCTVs will alert firefighters or police of any dangerous situations by the cameras will constantly check for incidents such as physical altercations or arson. Rather than identifying individuals through biometric data, the intention here is to check for dangerous situations.

New York City took steps to become a smart city by enabling LinkNYC, free kiosks around the city that provides not only free WiFi hotspots but also phone calls, device charging ports, and city maps and directions on tablets at the kiosks all free of charge. LinkNYC has been funded through advertisement revenue, so this would not cost any extra money for taxpayers or the government. NYC also has Transit Wireless offer free WiFi in underground subways for the many individuals that use public transportation. 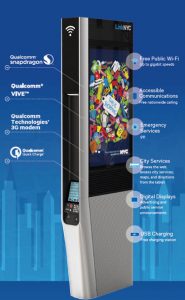 There are many smart city initiatives that can benefit the general public and save costs for the government while respecting individual data privacy, protecting individuals or groups from filter bubbles, and providing unbiased results from the use of IoT. As long as government officials can identify the risks and benefits of IoT, smart cities can be a success story.