The “Objective” Interviewer: Algorithms in the Hiring Process with HireVue
By TK Truong | November 1, 2019

Across industries, Human Resource (HR) departments are relying more
heavily on algorithmically powered tools throughout the recruiting and
hiring process. One of the growing trends is the usage of video
interviewing to produce candidate assessments. Among many competitors,
HireVue is gaining ground with over 700 customers globally from various
industries such as finance, hospitality, and retail. Simultaneously,
they have also been subject to the most scrutiny over the ethics and
ramifications of using algorithms to assess individuals.

While the implementation may vary by company, HireVue generally acts as
an intermediate step in the hiring process. After a company receives job
applications, recruiters can select some individuals for HireVue
interviews, in which they video-record answers to screening questions.
The videos are then processed and analyzed by HireVue’s algorithms,
which were developed based on leading industrial-organizational
psychology research. They consider potentially tens of thousands of data
points from facial movement, vocal tone, and linguistic elements to
determine candidate scoring. From there, the company can use the
assessments to help decide which candidates move onto the next
stage–likely an in-person interview. 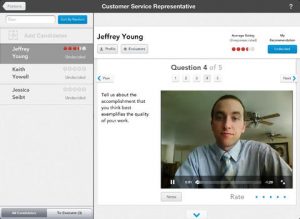 Implementing HireVue has some clear advantages for companies, especially
in terms of efficiency. For example, the hotel chain, Hilton
International, claims that HireVue helped them reduce their average
hiring time from six weeks to five days. Typically, recruiters must
devote a lot of time and resources to coordinate phone screenings with
candidates. These hurdles are removed with HireVue video interviews
since candidates can complete them at any time before a certain
deadline. The resulting assessments also allow recruiters to filter out
candidates much more quickly, which increases productivity.

Arguably, the typical hiring process already contains degrees of
implicit bias, but Hirevue claims that their technology can introduce
impartiality. Recruiters and hiring managers can find it difficult to
explain why they prefer a particular candidate, making them “ultimate
black box”, according to HireVue. On the other hand, HireVue utilizes
research to make their algorithms more objective and less prone to the
implicit bias that comes from the “gut feelings” that personnel may use
to make hiring decisions. People may not be aware of their prejudices,
whereas such bias can be detected and removed from HireVue’s algorithms. 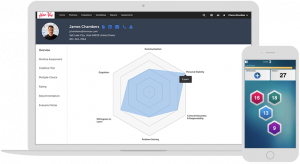 But what are the concerns?

Despite good intentions to increase efficiency and reduce bias, HireVue
is ultimately open to much criticism. First, some experts cast doubt
over the validity of the algorithms since they rely on detecting emotion
and sentiment–still an emerging area of research. Aside from that, the
biggest concern is that the algorithms may perpetuate bias because so
many data points are related to verbal communication and facial
expression, which likely skews towards Western ideals and norms. This
suggests that the algorithms may be biased against non-native English
speakers and potentially, those from non-Western cultures. If such
discrimination can be proven, companies using HireVue may inadvertently
violate employment discrimination law. To combat these concerns, HireVue
cites their diverse training data, which draws from various cultures,
and their rigorous process to check for bias and revalidate their
models.

However, since HireVue’s algorithms are proprietary, we cannot verify
their precautionary measures. To promote transparency and fairness,
HireVue should provide further details such as which biases they check
for and how they work with companies to test this. Although HireVue has
an advisory board, more expertise from various disciplines is needed to
weigh in, given that they may end up enabling large scale employment
discrimination if unchecked. With close collaboration and algorithmic
maintenance, it may be possible to use HireVue to reduce bias in the
hiring process, but the lack of transparency or independent audit casts
doubt on the product and company itself.