Classes were canceled on Thursday (10/10/2019) at the University of California, Berkeley, which was running on emergency power. Some staff members scrambled to preserve critical research work from harm as they worried about keeping laboratory animals safe. On a cold and clear Thursday morning, they were among tens of thousands of residents in Northern California, who woke up to a blackout as part of PG&E’s fire-precaution plan. 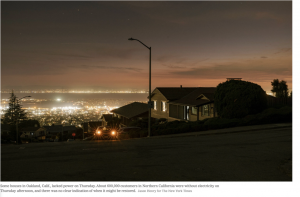 To protect public safety, PG&E (Pacific Gas and Electric Company) determined to turn off power due to gusty winds and dry conditions combined with a heightened fire risk. The shutdowns come a year after the largest wildfire in California history, killing 85 and destroying 19,000 buildings. Later May 2019, PG&E was blamed for the downed power it owns that caused the blaze. The high winds and dry weather create ideal fire conditions, authorities warn, with the potential to transform a spark into a raging inferno. PG&E fears windblown electrical lines could spark fires if power is not cut.

Since the shutdown, a few small fires have broken out, but nothing on the order of last year’s massive blazes. More than 2 million people, however, went dark. This is very disruptive to people’s lives and businesses to not have electric power. An economy as large as California and Silicon Valley, when you black out a significant fraction of the state, there are going to be large economic impacts. Northern California fire officials say a man dependent on oxygen died about 12 minutes after Pacific Gas and Electric shut down power to the area as part of a massive effort to prevent fire. 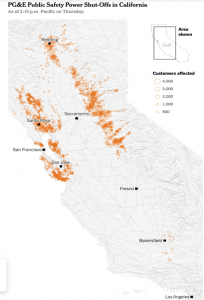 PG&E is an American investor-owned utility with publicly traded stock. PG&E denies that its financial travails had anything to do with the decision to turn off the power after its application claim of bankruptcy in early 2019 (PG&E said it expected wildfire-related liabilities topping $30 billion). “All those factors together mean that PG&E is extremely careful now, to try to take preemptive action,” says Barton Thompson, Jr., a professor of natural resources law at Stanford Law School. “Obviously PG&E is is particularly attuned to the need to take action. Part of that is wildfires, part of it is simply public scrutiny and prior public criticism.”

The question to myself then – Is it even legal action for PG&E to shut off the power? The answer is “yes” after some quick research. An investor-owned utilities are required to describe their processes for arriving at decisions like the one affecting California counties. De-energization program is the guidance developed by California State, referred to as “Public Safety Power Shutoff” as a preventative measure of last resort if the utility reasonably believes that there is an imminent and significant risk that strong winds may topple power lines or cause major vegetation-related issues leading to increased risk of fire. Actually shutting off power is nothing new for PG&E – the last time PG&E called a public safety power shutoff, for two days in June, it affected about 22,000 customers in the North Bay and the Sierra foothills, including Butte County and Paradise. The point I am still not clear enough is – how this “last resort” rule applies to this widespread power shutoff? What is the data that backs up the decision?

My next question is does the ownership structure of electricity distribution utilities matter? Distribution utilities are usually private or government-owned. There is constant debate as to which is “better” in terms of financial performance, service delivery and quality, or development in general. Is it possible for the government to take over PG&E and solve the mess? One reason for a potential negative answer is that taxpayers would have to take on the financial responsibility that just bankrupted PG&E — liability for its aging, unsafe electrical grid.(PG&E said it expected wildfire-related liabilities topping $30 billion). One idea has been discussed recently is breaking up PG&E into smaller companies. Regardless of the decision process, the disruption could serve as a focusing event for California to invest in local wind, solar, battery storage and other technologies that would prepare power outrage if it’s becoming the new normal.