Imagine having your hard earned wages ripped out of your tax return and held hostage while you try and prove the obvious flaws in an automated system. To add to this, your only form of recourse is a phone line that is notorious for its wait times. This is the reality faced by thousands of welfare recipients in Australia, trapped in a nightmare dubbed RoboDebt. Subject to two parliamentary enquiries and a Federal Court challenge, the ethics of data-matching to detect welfare fraud is in the spotlight as the Australian government continues to expand its reach into its citizens’ data. 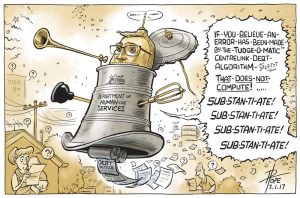 In the Beginning
In early 2017, Australian news outlets exploded over the government’s new automated data matching capabilities with thousands of letters sent out to welfare recipients demanding information or a debt would be raised against them. On average, the letters contained a debt of AU\$1919, an extraordinary amount for an unemployed person who may only be receiving AU\$535.60 a fortnight in welfare. What was even more galling, a large number of these debts are due to a known issue in the data-matching algorithm: it does not correctly account for intermittent earnings across the year.

Most people who receive unemployment benefits have casual jobs whilst they look for full-time employment. Benefits entitlement rates are adjusted from fortnightly earnings but the Australian Tax Office (ATO) income data provided to Centrelink was simply averaged across the financial year. As a result, if a person had earned a high income (or was employed full-time) for part of the year, the RoboDebt system automatically assumed this was divided evenly across every fortnight. This data mismatch is the most common cause of debts being raised incorrectly. If the recipient did not respond in the 28 day window or failed to provide the correct timing of wage earnings, the debt was passed to a debt collection agency (with an additional 10% recovery fee). In some circumstances it was then taken directly from their next tax return by the ATO.

Burden of Proof
Data matching between ATO and Centrelink is not new: sharing agreements have been available since the 1990s. However, the onus used to be on the department to prove debts before they were raised, the department has coercive powers to get payslips from employers to show the dates of earnings. Only when the person was proven to have both benefits and wages concurrently was a debt pursued. RoboDebt has pushed down the burden of proof to the individual, who likely has a limited understanding of the potential impact of the averaged data, going back up to 7 years. For vulnerable people on welfare, collating this data in 28 days can be formidable and they are unlikely to be aware of their appeal avenues to gain their full records, up to and including the department collecting payslips from employers on their behalf.

There has been some improvements in the system, just this month Centrelink released the new ‘Check and Update your Income’ process which provides much more detail and transparency to the user as they update their data, including real-time updates on the debt incurred. However, as raised by the Ombudsman, it still fails to adequately explain that “DHS may use Australian Taxation Office (ATO) data to calculate any debt, which may mean they have to pay back more than they need to.” (p. 31, Ombudsman. DHS is still taking an unfair advantage over vulnerable people whom may not understand the implications of averaging. A better approach would be to match real-time wage data with the ATO, stopping overpayments before they occur and limiting the recovery of small debts.

Because of the many outdated postal addresses in the database, users would be oblivious to the debt until they were contacted by a debt collection agency or the money was taken from their tax return. The original program development focused on correctly matching the two datasets, without regard to the necessary communication piece; if the recipient did not respond within 28 days of the initial contact, the debt was confirmed and passed to a collection agency. This highlights the importance of thinking through all the data required for a just implementation of an automated debt recovery system as well as the ability of subjects to understand the appeals process. DHS did not demonstrate adequate effort to make contact and after the first senate inquiry, the debt notices are tracked via registered mail. By not tracking the letters, the department took advantage of the 28 day window to deem the debts valid and apply collection fees. If the original system design had considered how to create a just and fair access to the appeals process, this would not have been overlooked.

Cost Benefit Analysis to the Australian People
Robodebt was touted by the government as a way to catch the ‘dole-bludgers’, those in society making false representation to get access to additional public funds, benefiting all Australians through the resultant savings. But, the large false positive error rate has meant the mental harm and stress caused by the debts have been felt by many, and were a primary driver for the Senate inquiries. The 2017 inquiry raised issue with the fairness, transparency and usability of the RoboDebt system. Although some of the issues around customer communication have now been met, a second enquiry into Centrelink’s compliance program was opened in 2019 and a separate Federal Court challenge is pending.

With all these challenges against the system it would be right to assume that it at least has been profitable for the Budget given all the debts recovered? Wrong! In fact, the system has cost almost as much to administer as it has recovered to date. The balance of cost, both in monetary and societal terms, are in the terms of reference for the 2019 senate enquiry. 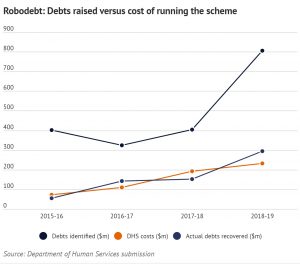 Who’s Next?
The Department of Human Services has just released a Matching of Centrelink and Medicare Data Protocol. Medicare is the universal healthcare system in Australia and the matching seems to cover all non-medication services. According to the protocol, “the data-matching program is designed to detect false, manipulated and assumed identities used by customers in submitting multiple claims. It is also designed to detect false information provided by customers relating to employment, medical eligibility and relationship circumstances” (DHS, July 2019). The public should demand transparency from the DHS on how their medical information will be used so they can pass judgement if the expansion of the RoboDebt system is beneficial to the Australian people. The current sustained criticism suggests otherwise.