Innocent Until Proven Guilty? Not Here.
By Jeffrey Braun | October 4, 2019

As their motivation for creating the site, CPD leadership states they are concerned about the number of accused individuals who are released on bail shortly after being charged. They allege that offenders are released too easily and too frequently, only to commit crimes again once they are freed. By publishing the data, their hope is to increase public awareness of this problem and thereby encourage the county courts to be less willing to release alleged offenders.

But the dashboard does not stop at showing aggregate statistics. On a separate tab, it also reveals the names of all the individuals charged with gun offenses. Clicking on a name in the list allows the user to drill down into the details of the arrest. It also allows you to see prior criminal convictions for each individual, if any. 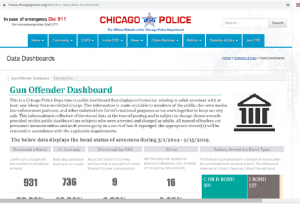 The site presents a serious ethical issue. By disclosing the names of individuals charged with gun offenses it can effectively deprive them of a fundamental right — their right to be presumed innocent until proven guilty, a right accorded to people charged with crimes in the US and in many other countries.

How can it deprive accused individuals of the right of presumed innocence? The people listed on the site have only been charged with a gun violation. They have not been convicted of a gun violation. In the minds of many people who will view the site, though, the distinction between being charged and being convicted may not be particularly meaningful. Many viewers will look differently upon those listed on the site simply because they appear there. This can in turn result in harmful consequences for alleged offenders, including lose of job opportunities, housing, and other benefits they would otherwise enjoy if their names did not appear on the site.

In its own defense, CPD states that the data is publicly available anyway. Anyone can go on to CPD’s site and view data on arrests the police have made, including gun offenses. This is true. However, the dashboard creates a whole new paradigm for accessing and consuming the data. It assembles and publishes it in such a way that it is easy for casual site visitors to see a long list of alleged offenders along with some very personal history that the accused individuals would likely prefer not be shared in such a public manner. This is a far cry from the research-like paradigm of looking up data on individual criminal cases or alleged offenders. It is a mass publication of data that can cause significant harm to people who have only been charged and not convicted of a crime. 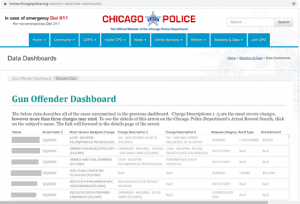 (Names in above screen shot obscured by the author)

We can compare the dashboard’s data access paradigm to the social context of the traditional criminal trial for some additional insight here. In criminal court cases, jurors are admonished that defendants must be presumed innocent until the state has proven them to be guilty. People viewing CPD’s gun offender dashboard, on the other hand, will likely not take to heart any warnings about presumption of innocence while they peruse the site. It is just too tempting when presented with a long list of alleged offenders to assume that some, if not most, are guilty of the crimes. This is only reinforced by the site’s characterization of the accused individuals as “offenders”, a term that implies the accused individuals have already been found guilty.

What feels even more offensive and potentially damaging is the fact that site users can easily view past convictions of those people shown on the list. Here again, a social context comparison is informative. US rules of evidence generally prevent introduction of past criminal convictions as evidence to support the guilt of a person on trial for a new crime (www.nolo.com/legal-encyclopedia/evidence-prior- convictions-admissible-against-defendants-who-testify.html). In fact, when an individual on CPD’s Gun Offender dashboard list goes on trial, the jury will likely not be told whether the defendant had committed a crime previously. No such protection is afforded when an individual’s information is viewed on CPD’s site, however. His or her past criminal conviction record is right there, for all to see and use to draw conclusions about the accused individual.

We all yearn for effective ways to decrease gun violence. Seemingly on a daily basis, we watch with horror, sadness and despair as the media report on lives senselessly lost to gun violence. We cannot, though, walk away from our long-held beliefs in the rights of the accused as we search for answers to gun violence. The power and impact of aggregated and easily consumed public data can sometimes deprive the accused of their rights, as has happened here with the CPD gun offender dashboard.

The Chicago Police Department should just publish aggregate data on their gun offender site. It will accomplish their stated goal and it will avoid deprivation of individual rights. At the very least, CPD should replace the term “Offender” on the site with a term that clearly indicates the individuals listed have just been charged, not convicted. The ability to easily click through to data on past convictions must also be disabled.