5%-10% of breast cancer is believed to be hereditary, meaning that it results directly from a genetic mutation passed on from a parent. The most common known cause of hereditary breast cancer is an inherited mutation in the BRCA1 or BRCA2 gene; about 70% of women with these mutations will develop breast cancer before the age of 80. Identification of these mutations can determine a breast cancer patient’s course of treatment and post-treatment monitoring, inform decisions about if and how she has children, and raise awareness in her family members of their potentially higher risk.

Because of this, newly diagnosed breast cancer patients may be referred for genetic risk evaluation if they meet criteria laid out in the National Comprehensive Cancer Network (NCCN) genetic testing guidelines, including family medical history, tumor pathology, ethnicity, and age. These at-risk patients typically undergo multi-gene panel testing that looks for BRCA1 and BRCA2 mutations, as well as a handful of other less common gene mutations, some of which are associated with inherited risk for other forms of cancer as well as breast cancer. 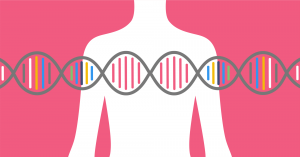 Genetic testing for breast cancer is a complex issue that raises many concerns. One concern is that not enough patients have access to the testing; some recent studies have shown that the genetic testing guideline’s criteria are too restrictive, excluding many patients who in fact do carry hereditary gene mutations. Another concern is that the testing is not well-understood; for example, patients and even doctors may not be aware that there are many BRCA mutations that are not detected by current tests, including ones that are more common that those that are currently tested. Yet another set of concerns revolves around the value of predictive genetic testing of family members who do not have a positive cancer diagnosis, and whether the benefit of the knowledge of possible risk outweighs the potential harms.

To help a patient navigate this complexity, this genetic testing is ideally offered in the context of professional genetic expertise for pre- and post-test counseling. However, under a 2013 Supreme Court ruling which declared that genes are not patentable, companies like 23andMe now offer direct-to-consumer BRCA testing without professional medical involvement or oversight. And even at its best, genetic counseling comes at a time at which breast cancer patients and their caregivers may be least able to comprehend it. They may be suffering from the shock of their recent diagnoses. They may be overwhelmed by the vast amount of information that comes with a newly diagnosed illness. Most of all, they may only be able to focus on the immediate and urgent need to take the steps required to treat their disease. To many, it is impossible to think about anything other than whether the test results are positive, and if they are, what to do. 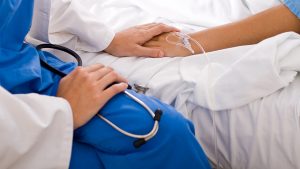 But to a breast cancer survivor, other concerns about her genetic testing may arise months or years later. One such concern may be about privacy. Genetic testing for breast cancer is not anonymous; as with all medical testing, the patient’s name is on the test order and the results, which then become part of the patient’s medical record. All medical records, including genetic test results, are protected under HIPAA (Health Insurance Portability and Accountability Act of 1996). However, the recent proliferation of health data breaches from cyberattacks and ransomware has given rise to growing awareness that the confidentiality of medical records can be compromised. This in turn leads to the fears that exposure of a positive genetic test result — one that suggests increased lifetime cancer risk — could lead to discrimination by employers, insurers, and others.

In the United States, citizens are protected against such discrimination by GINA (Genetic Information Nondiscrimination Act of 2008), which forbids most employers and health insurers from making decisions based on genetic information. However, GINA does not apply to small businesses (with fewer than 15 employees), federal and military health insurance, and other types of insurance, such as life, disability, and long-term care. It also does not address other settings of potential discrimination, such as in housing, social services, education, financial services and lending, elections, and legal disputes. Furthermore, in practice it could be very difficult to prove that discrimination prohibited by GINA took place, particularly in the context of hiring, in which it is not required that an employer give complete or truthful reasons – or sometimes, any reasons at all – to a prospective employee for why they were not hired. And perhaps the greatest weakness of GINA, from the standpoint of a breast cancer survivor, is that it only prohibits discrimination based on genetic information about someone who has not yet been diagnosed with a disease.

Though not protected by GINA, cancer survivors are protected by the Americans with Disabilities Act (ADA), which prohibits discrimination in employment, public services, accommodations, and communications based on a disability. In 1995, the Equal Employment Opportunity Commission (EEOC) issued an interpretation that discrimination based on genetic information relating to illness, disease, or other disorders is prohibited by the ADA. In 2000, the EEOC Commissioner testified before the Senate that the ADA “can be interpreted to prohibit employment discrimination based on genetic information.” However, these EEOC opinions are not legally binding, and whether the ADA protects against genetic discrimination in the workplace has never been tested in court.

Well beyond existing legislative and legal frameworks, genetic data may have implications in the future of which we have no conception today, more than perhaps any other health data. The field of genomics is rapidly evolving; it is possible that a genetic mutation that is currently tested because it signals an increased risk for ovarian cancer might in the future be shown to signal something completely different and possibly more sensitive. And unlike many medical tests which are relevant at the time of the test but have decreasing relevance over time, genetic test results are eternal, as true on the day of birth as on the day of death. Moreover, an individual’s genetic test results can provide information about their entire family, including family members who never consented to the testing and family members who did not even exist at the time the test was done.

The promise of genetic testing is that it will become a powerful tool for doctors to use in the future for so-called “precision prevention”, as well as personalized, targeted treatment. However, in our eagerness to prevent and cure cancer, we must remember to consider that as the area of our knowledge grows, so too grows its vulnerable perimeter – and so must our defenses against those who might wish to misuse it.