Can Blockchain and GDPR Truly Coexist?
by Joseph Lee

As of 25 May 2018, the General Data Protection Regulation (GDPR) has been taking no prisoners in its enforcement across the world. Facebook itself is expected to face at least $1.6 Billion fine for a publicly disclosed data breach that allowed hackers access to over 50 Million facebook user accounts [1][2]. Not only are tech giants targeted by this regulation, but any organization is also fair game. As of October 29, 2018, GDPR has fined a Portuguese hospital with for €400,000 for two violations of the GDPR due to poor data management practices. While it is comforting to know that regulation regarding the ethical conduct of data collection, storage, and usage is in place, how does GDPR impact areas that have fuzzy definitions of data controllers, processors, and subjects? In this essay, I will lightly assess the feasibility of a well known decentralized protocol, blockchain, with GDPR compliance.

The GDPR was first proposed by the European Commission back in 2012 with the initial intent on monitoring cloud services and social networks [8]. At the time, blockchain was not a well-known concept, and most cloud infrastructures and social networks were based on a central information system [4]. This centrality gives the GDPR a relatively easy target for substantiating and finding data breaches and other related violations. But how will the GDPR affect and even enforce regulations on decentralized protocols such as blockchains?

First, what is blockchain? The blockchain is essentially an incorruptible digital ledger of economic transactions that can be programmed to record anything from financial transactions to any digitized action [6]. Proponents for blockchain would usually cite that the following the critical characteristics of blockchain are its public transparency, a potential to increase transaction speed, and reduction of middle management costs. While this technology is famous for its applications in cryptocurrencies, it is essential to acknowledge that this decentralized protocol could potentially revolutionize other industries such as automating health records, smart contracts, or even banking [5]. That said, the future of blockchain will depend on how this technology can comply with GDPR. 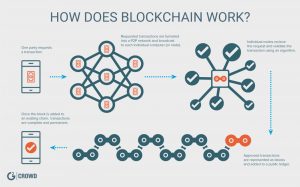 At an initial glance, one might think there is a paradoxical relationship between GDPR and public blockchains. For instance, among the many requirements set out in the GDPR, the “right to erasure” appears contradict the immutability of blockchain technology.

A promising solution that is gaining popularity amongst blockchain supporters is the use of private blockchains and off-chains. The general concept of this idea is simple. A person would store personal data off-chain and store the reference to this data on the ledger. This hashing ability means that it is possible for any person to delete their private information off-chain even though the original reference is still on the public blockchain network. I would strongly recommend visiting [Andries Van Humbeeck’s post](https://medium.com/wearetheledger/the-blockchain-gdpr-paradox-fc51e663d047) regarding the details of how off-chain and private blockchains can work, represented in figure below [7].

While this may technically meet GDPR’s definition of the right of erasure, there are other components of this workaround to consider regarding feasibility. The use and enforcement of off-chain ledgers would in actuality imply an increase in complexity and reduction of transparency. Moreover, the additional complexity could reduce the speed of peer-to-peer transactions [8]. In short, this means that in order to make blockchain comply with GDPR, we would need to sacrifice the primary benefits of having a decentralized network in the first place.

Despite the pros and cons of these workarounds, there are still a large number of unknowns. As mentioned before, GDPR relies on a clear definition of controller and subjects. However, managing these relationships will very complex when it comes to decentralized protocols. If we are not aware of every individual using blockchain, how can someone be clear on whom the responsibilities of controllers or subjects lie? How can we ensure that regulations are fairly and justly applied when such relationships are not clear?

While the future of blockchain compliance with GDPR is uncertain, it is vital for us to continue the dialogue regarding blockchain and GDPR coexistence. In 2017, the Financial Conduct Authority published a discussion paper regarding the challenges that blockchain faces in light of GDPR enforcement [4]. The overall conclusion was while there were significant challenges, the combination of GDPR and the use of decentralized ledger systems has the potential to improve an organization’s data collection, storage, and management of private data which would, in turn, enhance consumer outcomes and experiences.

In conclusion, the question of coexistence is still relevant and should continue to be debated and discussed. It would be exciting to see both relatively young paradigms interact and see how this interaction will create new precedents on how we regulate decentralized protocols.