You should have already successfully built the 3 LED (RGB) circuit and gotten them to fade with various color combinations. Congratulations!

In this lab, we explore analog input. Specifically, we’ll be looking at variable resistance devices known as potentiometers or “pots” for short. These are also known as “knobs” that you might be familiar with turning in other user interfaces, such as the volume knob on a radio. In exploring analog input, we will use Arduino to read pot values and control the LEDs based on those pot values. We’ll also be moving away from the more elementary circuit diagrams to the more advanced circuit schematic diagrams.

First we need to prepare the pot so that can easily connect it to our circuit. We do this by soldering wires to it.

2) Strip off about ¼” of the insulation from each of these wires.
3) Solder wires to the pot.*
Match the colors of the wires as in the image below.
Soldering often requires more than 2 hands. That’s why we have “helping hands”. Use them like in the image below to secure your pot and your wire.
To solder, you place the soldering iron on the wire/terminal and heat the joint, then apply the solder (keep the tip on the joint), remove the solder, then remove the iron in that order.
Let it cool before moving it around (it’ll take just a few seconds).
*We have lead free solder but if you are soldering anywhere else, you should know that solder often contains lead and so many pregnant women refrain from soldering or make sure they are using lead free solder.

Part 2: Controlling one LED from the one Pot

1) Extend your 3 LED circuit so that it includes a pot. Follow the circuit diagrammed below 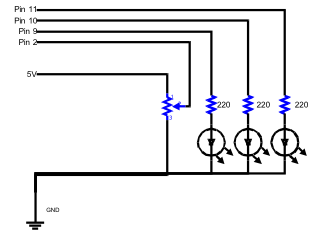 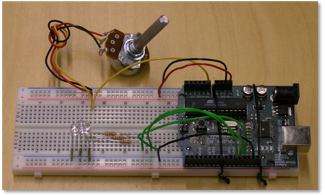 2) Use the potentiometer to control the blinking rate of the LEDs. On the Arduino website, there is some sample code which takes the pot value as input and uses it to control the blinking speed of an LED. You can also find the Arduino sketch here. https://www.arduino.cc/en/Tutorial/AnalogInput . You can ignore the stuff about photoresistors and just look at the stuff involving potentiometers and LEDs. MAKE SURE YOU DOUBLE CHECK THE PIN NUMBERS. Your should make sure that your pot is plugged in to pin A0 (A-Zero) so that it matches the pin in the arduino sketch. This is determined by this line in the arduino sketch:

in the Arduino sketch to match the pin you are using. This sketch only makes one LED blink; see if you can modify the code to make all your LEDs blink. You can try adding other LEDs by adding lines of code like so:

3) At this tutorial, there is some sample code which takes the pot value as input and uses it to control the brightness level of an LED. http://owenmundy.com/blog/2010/05/fading-an-led-with-pwm-and-a-potentiometer/ . Again, make sure that you are using the right pins for your potentiometer and LED. This is good practice for when you find arduino sketches online and you have to modify it for what you want.

1) There are two options for this part. 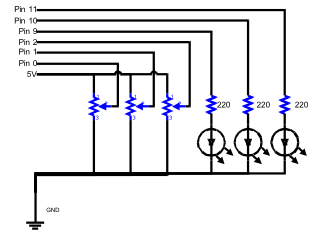 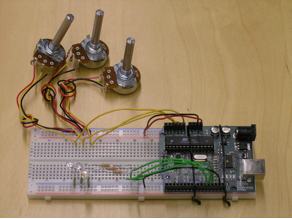