In Kenneth P. Fishkin’s, definition of taxonomy for Tangible User Interfaces, enough stress hasn’t been laid on an important aspect of interaction or the input i.e. the feedback aspect. We need to think about adding another dimension to the taxonomy. This could be based on how much humans perceive the interaction feedback(we could have partially perceived, fully perceived and not perceived categories).
Secondly I am not satisfied with the taxonomy as it limits the ways of interaction. Nowadays devices have started supporting other forms of interaction such as using eyes and brain waves. This dimension could be based on the different ways humans can sense or interact with an interface such as eyes, brain, speech.
The perfect example that comes to my mind to challenge the taxonomy would be Microsoft Hololens. When people wear the device, they see a sort of mixed-reality as there are objects seen that exist as well as objects that do not exist. So people can interact with virtual objects in the virtual world but gives a perception to the user as if the interaction is happening in the real world. Here, the feedback aspect is interesting as we want to know where should we actually categorize this experience because it would belong to all the embodiment types and almost all the metaphor types due to the mixed reality aspect. Hence we need to categorize this into perceivability. We would call this partially perceived as although we are able to see or hear things in the mixed world, we are still not able to touch it as we do not feel it.
In conclusion I would say that, although Fishkin’s article doesn’t cover new forms of interaction, it was a great piece of work for the time when it was written in and helped me clearly understand the basic taxonomy of tangible user interfaces. 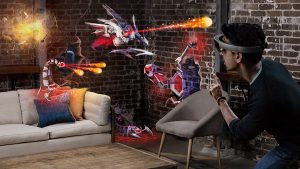