My uncle is a Nuclear Science PhD and he likes to tinker with things and come up with his own solutions.

His glasses are an example of his refusal to toss away, as he puts it, “perfectly functional elements” — so he Frankensteins some most bizarre concoctions, which in the end, you have to admit, do work and achieve the means to the end.

Pic 1: The frames of his current prescription glasses (for myopia) broke, so he popped the lens out and took another frames of a whatever reading glasses and taped them in.

moral of the story: this is a sort of interesting design problem of creating a frame that could withstand a few lens prescription updates. Normally if the lens of your glasses need to be updated you have to change the entire frame – which themselves are not super cheap. Glasses shops say that they don’t have the capability to interchange new lens. (is that really true?) perhaps this is “design” limitation that can be looked into.

Pic 2: Since he is of a certain age so he needs reading glasses, but he also can’t be bothered to go out and get a bifocal, so he takes an existing reading glasses of the strength he needs and sticks them in behind his big frames (on which are taped the lens for his myopia prescription).

moral of the story: besides the funky bug-look of 6-eyes, you gotta admit there’s a system there; he found reading glasses with frames just the size that would fit behind the larger frames of his normal-use glasses. There’s a heirarchy of scale that corresponds to frequency and importance of use. The larger, sturdier frames are for his myopia, which is a first and foremost need, and the lesser sized reading lens/frames are for as-needed.

Even though there are solutions out there that already exist, so this is actually sort of an example of reverse functionality.

But in a way it’s a sort of survivalist mentality, which is kind of interesting –

I got this couch for free on craigslist and have not yet gotten bed bugs from it. Hooray!

Below you can see my roommate laying on the couch sideways. To make this comfortable (and to not have her head and neck on the rigid and uncushioned armrest), she has removed one of the pillows from its intended position, and put it between her and the armrest.

I’ve tried this setup as well, and interestingly it is a far more comfortable position than the traditional and originally intended position. A drawback of this approach is that it makes it harder to share the couch. Only one person can use the couch this way at a time, versus when used normally, the couch has a capacity of at least two people.

Perhaps Nicole’s (and my) use of the couch in this way indicates a need for a couch experience that involves a large amount of back and neck cushioning, a deep angle of recline, and elevation for the feet and legs. I think that I would absolutely sit in this sort of chair/couch. 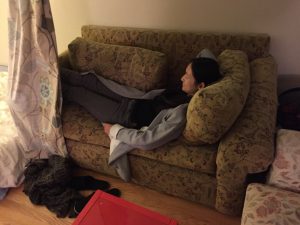 While a simple chair has a structure that is very intuitive to adapt to, sitting (or even semi-standing) humans have a tendency to shape themselves in innovative ways that chair manufacturers might not have foreseen.

Some of the ones that caught my eye include a continuation of an activity, positioning the chair in such a way that another use is satisfied or a user alignment orthogonal to the intended one. As a continuation of an activity, students might carry a bag and in a hurry completely nullify the back-rest that the chair provides, by resting the bag and sitting on the edge themselves. Repositioning the chair so that a user can stretch a muscle or rest a knee while deeply engrossed in study or a standing conversation respectively are more cases in which a seat’s intention starts to become less rigid in how it must be used. While the intended back-rest is for the back, sometimes the lack of an arm rest allow the user to rest sideways on a back-rest allowing the muscles to be stimulated in that position.

Here are some of the images:

1. Continuation of the preceding activity 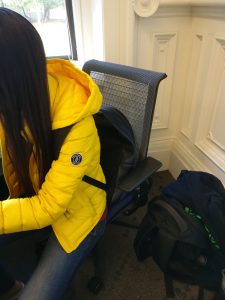 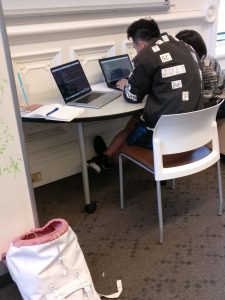 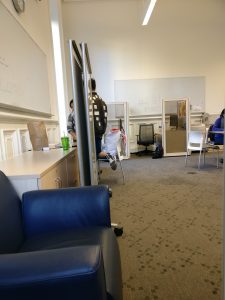 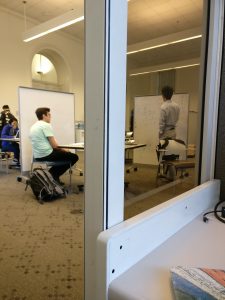 This is a thoughtless act I sometimes commit when I go to the rsf. Since there are so many different lockers sometimes it’s hard for me to remember which locker I’ve locked my bags with. So I would leave the tail of my backpack out for me to identify later. I think it’s interesting to share because it’s a pretty common problems for lots of people at the locker room and the lockers are not designed to be remember easily. This offers a new design opportunity.. The locker could have colors on them to go along with the numbers! 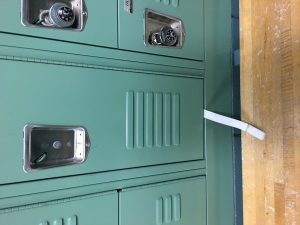 This is a thoughtless act that I am guilty of. Often, when I need to keep my Macbook charger nearby so I don’t have to reach for it when I need it the most, I tend to clip it to the side of the screen. While this is really convenient, it is a thoughtless act because the screen isn’t really designed for holding the charging cable or for that matter, anything else. It will actually be helpful if there was a proper solution to the problem of wanting to keep the cable nearby. 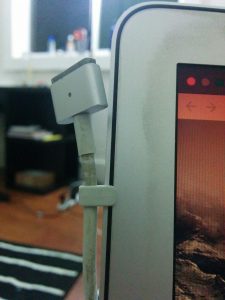 I came across a few thoughtless actions inspired by my MIMS classmates.

When a student comes to a small classroom where there is no table in front of him/her, people often put their laptop on their legs in this posture. An easy design solution would be to add a foldable table for each chair, like these foldable/hidden ones for the front seats on any airplanes. Many other universities have this kind of chairs, unfortunately, South Hall doesn’t have them. 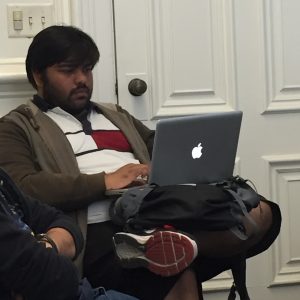 Another thoughtless action is also inspired by my classmate: when people have a luggage or bag while sitting in a moving vehicle, they want to free their hands to do other things, while at the same time, they want to hold their belongings. Many people would put the luggage between their legs to secure it. A design solution could add a clip on the bag or luggage that hold it against the wall or holding poles. 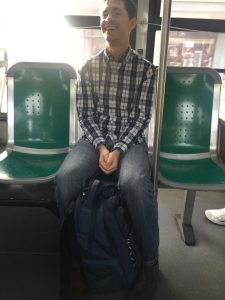 It’s interesting to notice some of the design interventions that have already been applied around campus to deter the very thoughtless acts that I was looking for. For one, all of the trash cans I’ve noticed have a peaked or domed design, such that pieces of trash do not balance on top of the trash can. I imagine this is so that people will actually put their trash INSIDE the trash can rather than on top of it. However, that doesn’t quite stop people from leaving trash wherever they can find a supporting base for it: 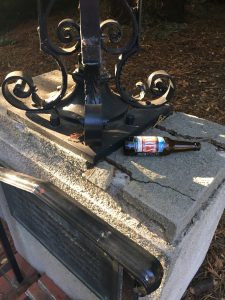 Including in a tree! 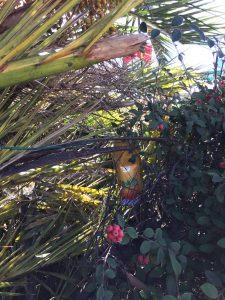 One of the things I do regularly is wrap my teabag string around the handle of my mug: 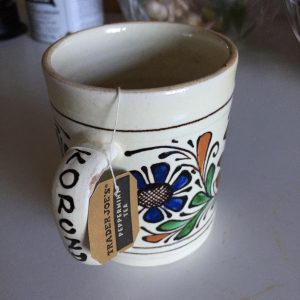 I hadn’t thought of this as a thoughtless act until seeing it in one of the Pinterest streams. But it accomplishes my goal of not having the teabag become lost inside the mug when I pour hot water over it. Baristas tend to do the same thing: if they put a teabag in your commuter mug, they’ll screw the lid on with the teabag label hanging out. One potential design update is to give commuter mugs a small notch where the teabag string can be held securely. However, a potentially better one is just to have a tea strainer inside the mug, which some designs already accomplish. That works well for both loose-leaf tea and bagged tea.

While shopping for groceries last night (and TJ’s was as crowded as I’ve ever seen it—it was right before the debate, and Sunday night, and everybody and their mother wanted to get groceries for the week. Suffice it to say, I was waiting for a while with a rather heavy basket. So I placed it on the floor, and pushed it along with my foot when the line would move forward. 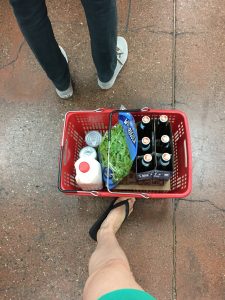 I see this also in airport lines, when people push their heavy luggage along the floor rather than picking it up and carrying it forward as the line moves along. A design improvement could be a place for people to keep handbaskets or small but heavy items up at waist level as they wait in line, for instance with a bar-height shelf. It would also serve to keep the line orderly.

We Indians are known to do a lot of thoughtless acts in our life. In Hindi we call it “jugaad” (refer this link). So I thought, there must be a lot of instances around me that would prove the same. I looked around myself and found these three thoughtless acts. 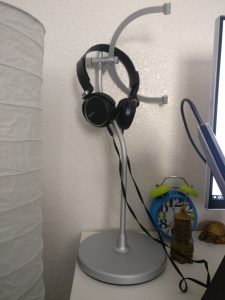 This is a lampshade which is also being used as a headphone holder. This helps me keep the wire untangled and provides me an easy access to my headphones whenever listening privately. 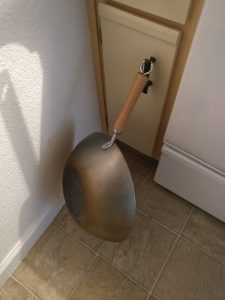 This is a Wok which is huge to be put in either a dishwasher or any drawer. The obvious solution to placing it somewhere – hanging it from one of the drawer handles ! 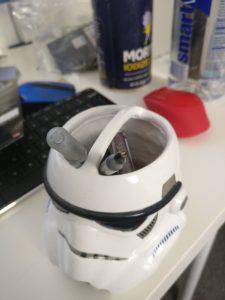 This is a toothbrush holder which is being used to store a variety of items from pens to nail cutter, keys , memory card etc.

For this assignment, I wanted to find a unique instance of a thoughtless act. I was searching around for an interesting use of everyday objects and it wasn’t until I was at my friend’s house that I found what I was looking for. They keep their bikes stored inside and while it’s in the house, the bike is also used as a paper towel holder, a bike helmet holder, a U-lock holder, a drying rack for damp dish towels and an oven mitt rack. They also keep their bike close to the kitchen so all of the objects it stores are readily available. 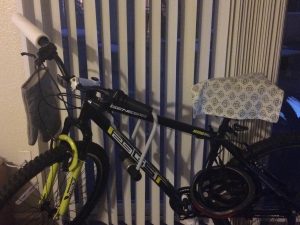 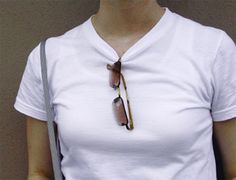 This one is also very interesting. Newspaper is light-weight and easy to carry, while it can also be used for sun shading when people are lying on lawn.

Below is a thoughtless act when you run out of desktop surface, and the bottom platform of your lamp could be a possible place for temporary storage. 🙂 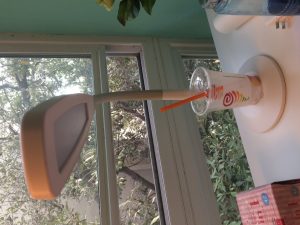