I wanted to make a fan that fights with its on/off switch (hence oscillating between on and off). I envisioned a balance-based switch (the paper shape) on top of a force meter. To turn on the fan, you balance the switch on the FSR. The fan turns on, but the breeze it produces pushes the switch off balance, turning the fan off. The switch then comes back to balance, turning the fan on again (and so it continues). A pot is used to control the fan speed. 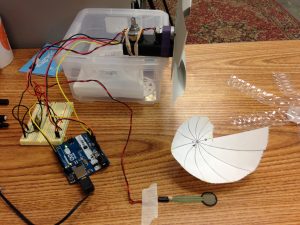 Well everyone must have seen the touch me not leaves which close when touched. I tried to create something similar but a different reaction to the touch. I created an origami lily and attached the stalk to the dc motor. On the flower is a photo sensor that detects if a hand is close to the petals. When close, the dc motor gets activated and moves the flower in order to depict that the flower is not meant to be plucked. 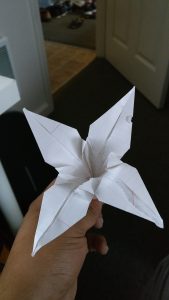 For this lab, I wanted to try to extend the range of motion from the DC motor to a pinwheel, and then to try to move water with that. Thus, I made a dolphin that can splash with a high enough energy rotation from the potentiometer. Otherwise, it will just make a fitting high pitched squeal (due to the motor being restricted in its range of motion). I also created an accompanying sketch in Processing that does waves. 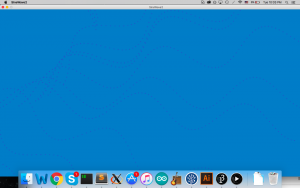 This Lego turtle gets angry and vibrates whenever there is light on the light sensor. There is a DC motor inside the turtle. The motor has a piece of cork on it, so running the motor makes it vibrate. If the light sensor reading is over 500 (about 50%), then the turtle will pulse vibration for 0.2 seconds, then pause for 0.5 seconds. This makes it sound angry without being overwhelming. The speed of the motor is directly related to the light reading. 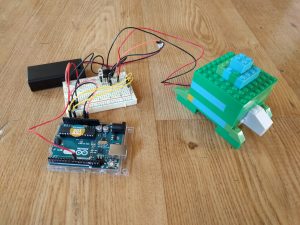 Description:
For this lab, I wanted to test how much power our little DC motors have. Since it’s acknowledged that they don’t have much torque, I didn’t want to choose something too heavy, but I did want to extend the range of the spinning motion so that it would be visible from far away. Looking around my apartment, I happened to have a poster tube sitting around, which I realized would make the perfect object: it’s long but slender, doesn’t weigh much but it stable, and is round, so I could fairly easily spin it with the motor without getting too much vibration.

So, I created a monochrome version of a barber’s pole:

First, I used the potentiometer as the speed control so that I could “lock in” a spin speed: 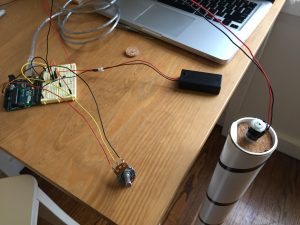 But after that, I wanted to try out using the FSR so that I could control the spin while holding the motor, so that I’d have I/O coincidence. That’s what I’ll be demonstrating in class.

One interesting observation I had was that with a heavy-ish weight, the motor takes quite a bit of “revving” to get to a level of power sufficient to overcome the inertia. And then, after removing power, my barber pole keeps spinning for quite some time. Interesting to watch it in action.

Code:
(This is the final code, using the FSR rather than the potentiometer.)

I started this project by wanting to create a moving cat toy for my kitten, Juno. She’s home by herself most of the day and gets quite bored. This would be a way to keep her entertained, as well as healthy. I failed to see the flaws in my plan, however: 1. cats are afraid of loud noises, and 2. they’re more interested in playing with wires than the toy.

Juno, ruining her chances of a new toy

I changed direction and decided to create a toy for myself from my childhood: a pinwheel. I’m quite a fan of origami, so I welcomed the exercise. I created the pinwheel from a large piece of orange construction paper (a tribute to the Giants who just lost the series), used a ceramic straw to form a sturdy base, and two LEDs on either side to create a fun, multi-colored spiral effect. I also added a piece of cork to keep the pinwheel from flying off the motor. Finally, the potentiometer controls how quickly the pinwheel spins.

Unfortunately, the wires I soldered to my DC motor snapped off and additionally got stuck in the breadboard; but, I’ve seriously considered certain applications that I was in the middle of developing. When the FSR has pressure applied to it, the DC motor spins more swiftly. So, as pressure is applied to the FSR, it is as though we are rushing forward through time (similar to Hermione’s time-turner pendant). Additionally, I considered this process to be similar to how an electric pencil sharpener works. When pressure is applied to the pencil sharpener, it knows to spin and sharpen your pencil.

For this lab, I chose to make a coffee cup that stirs itself. I used the DC motor to power the spinning/mixing of the spoon within the coffee cup and I programmed the potentiometer to control how quickly the spoon stirs the coffee. 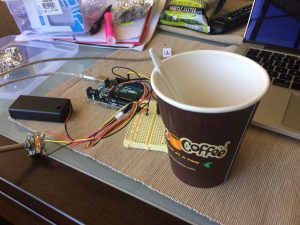 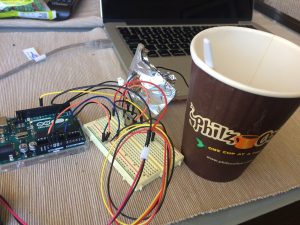 South Hall is haunted by a ghost!
Just kidding (maybe) – I used the setup given in lab to explore how movement of pens would work when attached to a motor. I used the same circuit from the basic lab instructions, and connected different types of pens to to the motor and let it draw across the paper.
I found that the pens with the larger tip perform better, and they are more stable. The motor tends to just drag the pen across the paper, as you speed up the motor with the pot, it moves faster. If you change the speeds rapidly, it creates more of a “bend” pattern as the weight of the pen is distributed on the motor.
Is it the ghost telling us to finish our homework? Probably.

This is similar to Spinbot: http://www.makershed.com/products/make-spinbot-kit-bagged 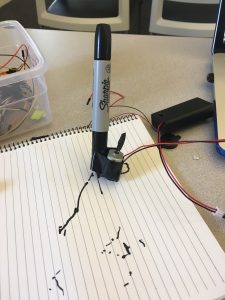 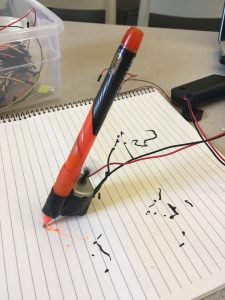 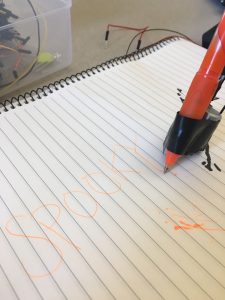 For this mini project, I made a small installation where people can control the rotational speed of dancing wires and see the change in the form of the dancing wires as the speed changes. 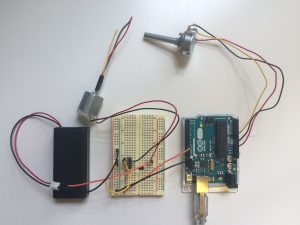 The wires dancing at different radiuses, when the rotational speed of the  DC motor changes: 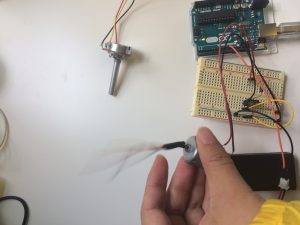 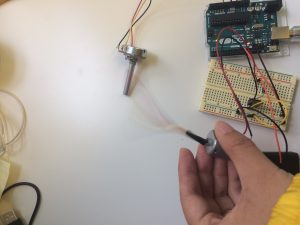 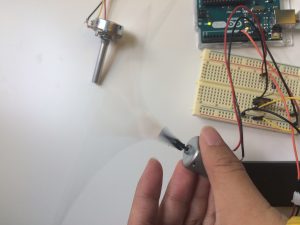 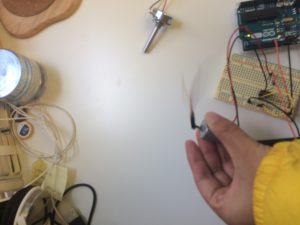