For our cuckoo clock, we built a simple reverse linkage to translate the backwards motion into sending the bird forward. Vivian used the laser-cutter to get the wood in the dimensions we needed, and drilled holes to put in the pivots. We attached it to the box by threading through the hole with chopsticks. We also added chopsticks (and pipe-cleaners) so that the linkage didn’t shift up, down, left or right too much.

We played around with different configurations until we decided to flip the box around and have the door open outwards and up (kind of like a pen where you would keep an animal). We had a lot of difficulty translating the backwards motion into the more diagonal motion of the string, and added little wheel pulleys along the top to help adjust the direction and motion of the string to the right angle.

We also experimented with rubber bands to have the clock “reset” itself automatically, so that our pulling motion would create tension in the rubber band, returning to its original position once we let go. 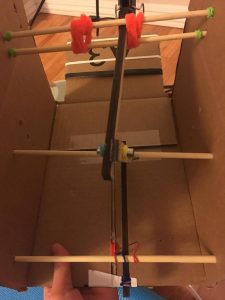 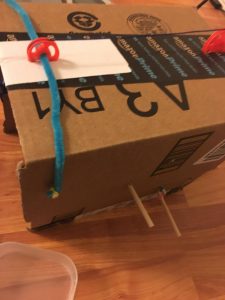 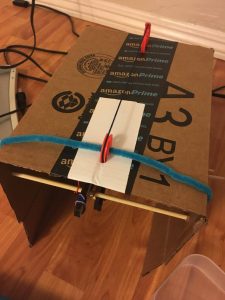