For this lab, our task was to build “Cuckoo Clock” mechanics. We first drew out specifications for the doors that would open and close using one mechanism. We also wanted the bird’s movement to come from that same force. Initially, our plan was to build sliding doors that would open after pulling a string that was attached to the doors using hooks we created. However, the sliding doors needed stability which we thought could be provided by placing the stationary and moving doors on the same track. But, we found that there was too much friction between the tracks and the bottom and tops of the doors and we couldn’t open the doors in a seamless fashion. What’s more, we found that the hooks we created weren’t stable enough to open the doors. We chose to reevaluate our plan and instead, built a mechanism that would simultaneously push the bird out and open the doors outward. We built stationary boards (supported by “L” shaped pieces of cardboard) to which we connected the doors that would actually open. Using rubber bands and push pins, we adjusted the elasticity of the bands so that the doors would open with ease and would close on their own. The bird was attached to a flat, triangulated piece of cardboard and both of these pieces were connected to a small, wood beam. Using a small hinge, we attached this beam to another piece of wood and created a lever to push the bird through the doors. The lever was attached to a stack of wood pieces and is held together with a rubber band. Finally, in order to get the height we needed, we placed this entire mechanism on top of a tissue box. 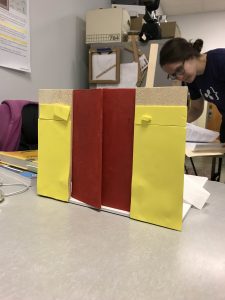 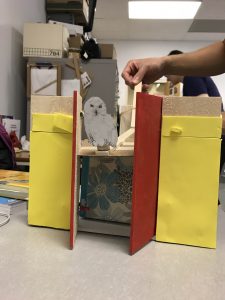