Vision:
To create a collaborative puzzle for children which is fun physically and can be digitally enhanced for new ideas. 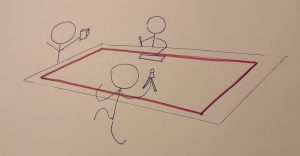 Description:
We envision this project as closely embodied, full-metaphor tangible UI where our main targeted audience – children aged 5 and above – can use drawing tools like a compass, a ruler and maybe a few other daily objects to contribute to a narrative in a game environment on a table top interface. The intention of the team is to encourage children to think of geometric tools in a more intuitive and intimate way. This project can also be thought of something adults can engage in to communicate with each other as conversation starters or as a game to play with over a get-together.

The puzzle is tied into a narrative where the players will use their tools to help a protagonist navigate her way to a reward. This environment would be offset by the tangible constraints that the drawing tools themselves pose and digital constraints through virtual traps in the puzzle which help make the game more difficult and engaging with progress and learned skill. The narrative that we’re looking to tie in this also involves the use of materials – straw, wood and stone – and this led us to exploring possible narratives like Three Little Pigs and the Big Bad Wolf or getting a colony of hardworking ants to secure food amid obstacles.

As a starting point, the most basic game environment could be a fluid path of dots indicating a reward-filled path to the goal and the task of the users is to connect these dots using the drawing tools that they have. To make the learning process more coherent and make gravity more intuitive, we chose to go with a birds’ eye view of the environment, so we are looking at the protagonist from above. The dots can involve materials that stack up across levels and the users may use up materials to build their path to the goal, so they might be nudged to draw optimal paths. 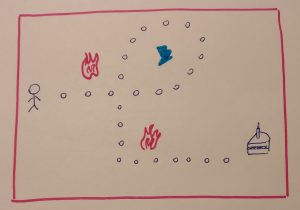 The game dynamics physically would be the users drawing paths using soft tools (since the age bar is low, we also want to make sure that the compass and rulers are not sharp/pointed objects). Straight-line paths can be drawn using a ruler and circular-directed paths can be made using a compass for the protagonist to travel along the circumference. An additional advantage is that users can indicate direction of the movement from the way they draw these constituent paths. 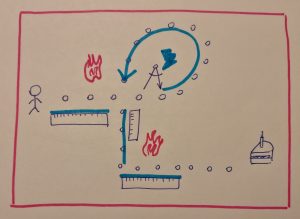 Next steps:
The next step for us as designers in this particular project would be to scope the project so that our vision is achieved. This would involve detailing out the game narrative – creating a story, reward system – and the virtual game dynamics in addition to understanding intuitive ways in which children use geometric tools so that the physical interactions that we have proposed can be refined.

Looking forward to hearing your feedback! 🙂