At first I wasn’t sure if this was an example of industrial design, but Blauvelt includes the Airborne Snotty Vases and Buildings of Disaster as examples, so I figured it was worth thinking about. Growing up, our local frozen custard and burger place (it’s the Midwest…) featured a sculpture of a giant spoon and giant cherry (first image below). Though it was not the designer’s (or at least restaurant’s) intention, all the kids wanted to climb on the cherry and slide down the spoon (hence it was roped off). I remember liking it because it was a normal thing, but made really big and somehow that was fascinating, which I think is what Blauvelt’s “transforming the everyday” is about.

I remember feeling a similar fascination at a mundane thing made big when I saw the giant safety pin sculpture by Claes Oldenburg and Coosje van Bruggen at SF’s de Young museum (second image below). While also meant as an art piece, it reminded me of the spoon and cherry and made me think how “regular sized” objects could take on new functions if they were made bigger or smaller (the spoon could be a slide, the safety pin could be a lamp post). What function might an X serve if it was made really big/small, other than being an X for giant/ants? Some examples already exist: dinner forks and pitchforks, knives and swords, sewing pins and stakes/posts. It was interesting to note the common function of these tools, even if their use contexts are quite different. 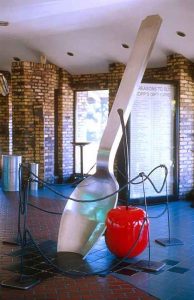 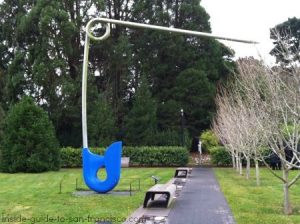