Description:
For this lab, I wanted to focus on transferring data from multiple variables and multiple sensors from Arduino into Processing. I was less concerned with what visualization to make than how to give someone more control over it and how to allow it to have multiple input streams. Because the photocell was too sensitive for easy daylight use, I stuck with the FSR for my main sensor. I kept the LED within the circuit so that it could provide me with a backup indication of the pressure on my sensor, and then I added three pots back into the circuit. Each pot controls RGB values, and can be adjusted independently. The FSR I covered with a stress-reliever type foam ball with a slit cut into it. This allowed me to slip it over the FSR and it could act as a diffuser for the squeeze pressure on the ball. This way I can squeeze on the ball in general and still affect the FSR value. The visualization responds quickly to changes in pressure and color. (The nice thing about using RGB values instead of RGB LEDs is that we can actually get additive white onscreen!)

I also ran into some problems in the making of this visualization: Processing was not correctly reading in the final value from the serial input. After troubleshooting to determine that the problem was indeed within Processing, I added in a dummy value as a final value in my Arduino output as a quick solution. I also had an issue where I was getting a “USB device drawing too much power” from my computer. After trying a few solutions, I realized that two of my pots had shifted on the desk and were touching bare wire at one spot. After rearranging and separating them, I was able to get the circuit working again.

Here is a GIF of my animation (I am squeezing with one hand and adjusting the pots with the other hand): 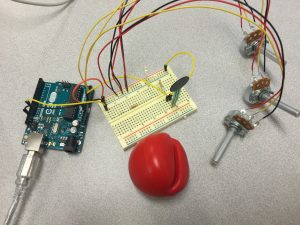 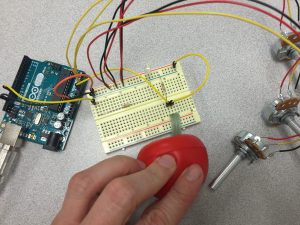