Our midterm project proposal is an immersive installation piece exploring the following characteristics:

One version of the experience is as follows.

Movement towards each general direction induces at first subtle changes in the light/music. For instance, the participant’s position would alter the relative loudness of different voices in the piece. Stepping deeper into the room would intensify the volume (and perhaps clarity) of heavy strings in the piece, with birdsong and light strings fading somewhat, so the participant has the experience of being inside an environmental performance of the music.

Participants can thus “play” with the music by altering their position and exploring hidden affordances within the room.

The minimal conception is as above. Other planned/potential variations include:

There has been some work on the specific musical traits that tend to induce a strong emotional response in the listener. One researcher, Martin Guhn, a psychologist who has run experiments with different musical pieces, provides an analysis of these traits. These pieces:

In short, music is “most likely to tingle the spine… when it includes surprises in volume, timbre and harmonic pattern.” [1] We chose Andrew Bird’s Yawny at the Apocalypse as it contains all or most of these traits, but wanted to explore whether some kind of agency on the part of the listener, typically absent in most music and art (which tends to be one-directional), can evoke a more intense emotional experience.

Below is a spectrogram of Andrew Bird’s piece. 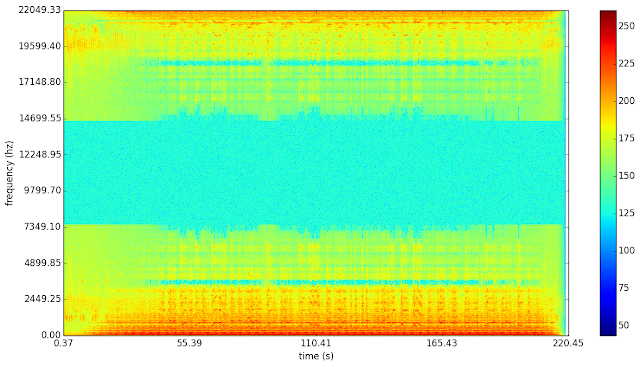 Some of the traits described by Guhn are visible here. One way of approaching the analysis is the unexpected resolution of dissonance, or unexpected concord between dissimilar objects, which includes what I describe as “spectral complexity.” Bird’s piece begins with bird-song at a high spectrum, before deep, lower-frequency saturation of sound is introduced around 0:10, until a shrill pitch (rather like whale-song) is introduced the 0.42 mark. A spectral band or gap is clearly visible stretching throughout the song after the high pitch is introduced. Each of these voices are highly dissimilar but produce unexpected concord.

Other possible pieces (with different corresponding actuation) are below. Many of these pieces display similar traits or interesting variations on Bird’s piece.

The project taps into past work in John Chuang’s biosensors course. Some of the work can be viewed here: http://musiconthebrain15.blogspot.com/

One thought on “Midterm Project Proposal”