I wanted to test multiple simultaneous LEDs blinking at different rates and came across an example that faded the LED lights. Using Arduino and the red, green, and blue LEDs, I connected pins 9, 10, and 11 to the breadboard; via resistors, these three pins connected to the blue, green, and red LEDs, respectively. I made the blue LED fade the most rapidly, fading completely in 250 milliseconds. The green LED is intermediate, fading in 750 milliseconds. The red LED is the slowest, fading in 2550 milliseconds. After a light fades, it restarts back at full brightness.

Originally, I used pins 11, 12, and 13, but only the blue LED, connected to pin 11, would fade while the green and red LEDs would remain their initialized value. After a few Google searches, I saw that only certain pins read analogWrite(), and so I adjusted my pins accordingly. 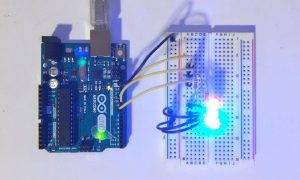