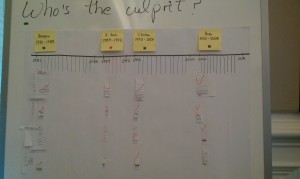 The objective of our visualization was to investigate the possible “culprit” in the changes within average income, share of income, share of federal tax revenue, and household income (before taxes) across different sectors of the United States population. When we were brainstorming, we originally thought this infographic would be great for middle-income household workers in order to educate them on who could possibly be responsible for the state of the economy now. We decided to focus on four key presidents: Ronald Reagan, George H. Bush, Bill Clinton, and George W. Bush. We split up our graphs into four key time frames that each president was in office for, and analyzed any changes that occurred specific to that president. After we picked our key demographic, we decided to pick and choose which graphs were needed and which weren’t, since we thought some weren’t relevant to the time frame and objective.

Once we were able to place all of the charts and pieces together, we discovered interesting facts about the data from each president’s time in office. While the general population stayed relatively consistent over the course of ~27 years, the data from the top 1% of the population fluctuated greatly with constant rise and falls in all categories. Based on this data, we determined that the most drastic increase in average income, share of income, and household income for the top 1% of Americans occurred during the Clinton administration; we then deemed him the “culprit” of this eventual trend.